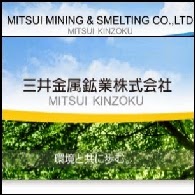 (Reuters) - Japan's biggest zinc smelter, Mitsui Mining and Smelting Co Ltd  expects the zinc price to recover toward $2,300 a tonne in the second half of the year because of a likely deficit in the global refined zinc market through 2017.

"It's been underperforming due to slumping oil prices, a higher dollar and worries about China," Osamu Saito, general manager of Mitsui's metal sales group, told Reuters on Monday.

"Still, the price is likely to rebound toward $2,300/T in the July-December half as fundamentals including an expected deficit of global zinc market in 2015, 2016 and 2017 remain unchanged."

Mitsui has also slashed its annual premiums to Asian buyers for 2015 by about 10 percent, marking the first cut in six years as rising exports by China spill into the region following a metals financing scandal in the port of Qingdao.

The scandal has squeezed access to credit, forcing Chinese selling of stocks to raise money and reducing zinc premiums - a surcharge paid to obtain metal.
Faced with lower premiums in China, Mitsui has reduced term export contracts to the country for 2015, Saito said.

"China's export push will be short-lived, but its recent escalation in metal output is worrisome," he said.

Mitsui, which plans to produce 223,000 tonnes of zinc in the year ending March 31, is also still holding talks with miners on zinc treatment charges (TCs) for 2015.

"The talks are headed in favour of smelters, but we can't disclose details," he said, adding that the negotiations have been delayed as the recent fall in zinc price made it difficult to agree on the base price for this year.
Posted by Unknown at 8:56 AM