Copper up, FCX down as workers halt production at Grasberg 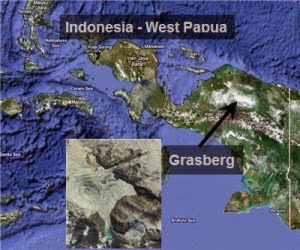 The copper price recovered from a one-month low on Wednesday to gain 3 percent on Thursday, as the metal markets reacted to a dovish Fed statement and news out of Indonesia that production has stopped at the Grasberg copper and gold mine.
Workers blocked an access road to Grasberg – the world's second largest copper mine by capacity – for the fourth day, Thursday, leading to speculation that the shutdown will have a material affect on prices, The Australian reported. A statement by the US Federal Reserve the same day signalling that the central bank is less likely to raise interest rates than expected, was also supportive of copper.
Three-month copper on the London Metal Exchanged leapt 3.2 percent to close at $US 5,850 a tonne, the biggest one-day percentage gain since February 3 and well above Wednesday's one-month low of $US5,621.50, the Australian said.
Bloomberg reported that the blockade was not organized by the union, but about 50 workers from seven tribes in Papua who are seeking promotion for not participating in a labor dispute last year. Output was suspended starting Monday but shipments from old stockpiles continue, according to a union spokesman quoted by Bloomberg.
Nevertheless, Freeport-McMoRan Copper & Gold’s (NYSE:FCX) investors saw the labor dispute as good reason to dump the stock. Trading on heavier-than-normal volumes, FCX slipped 5.32 percent to $17.26 a share on Thursday in New York, just under a dollar above the 52-week low of $16.43.
Work stoppages at Grasberg are fairly common. Last October open-pit operations were suspended as protesters demanded management review safety conditions following an accident involving a truck that killed four workers. The previous year workers set a tent on a mine access road following a landslide in Big Gossan that killed 28 employees.
Posted by Unknown at 2:46 PM