Whether as a result of an unprecedented scare campaign by the Swiss National Bank (most recently reinforced by Citigroup), or due to confidence that Swiss gold is as safe abroad as it is at home, or simply due to good old-fashioned "hanging chads", today's most awaited event has come and gone and the result - according to early projections by Swiss television SRF - is that the Swiss population overwhelmingly rejected a referendum to force the Swiss National Bank to hold some 20% of its reserves in gold in a landslide vote, with about 78% voting against what AP politely termed "protecting the country's wealth by investing in gold."
As Bloomberg reports, the proposal stipulating the Swiss National Bank hold at least 20 percent of its 520-billion-franc ($540 billion) balance sheet in gold was voted down by 78 percent to 22 percent, according to projections by Swiss television SRF as of 1:00 p.m. local time. The initiative “Save Our Swiss Gold” also would have prohibited the SNB from ever selling any of its bullion and required the 30 percent currently stored in Canada and the U.K. to be repatriated.

A map showing the breakdown of the Swiss vote by canton: none of the 23 Swiss regions had a majority vote for the gold initiative. 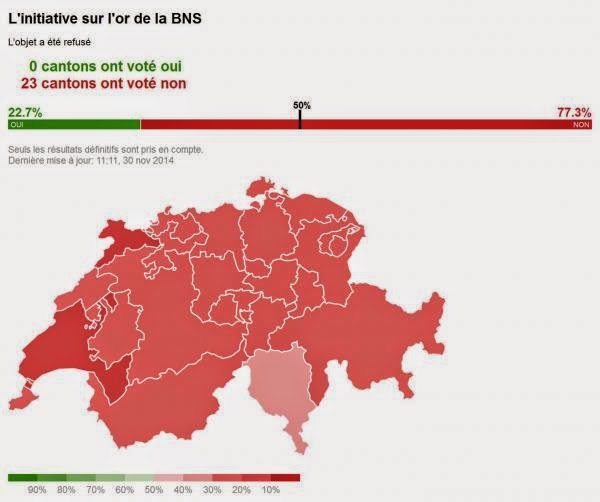 That said the decision will likley not come as a surprise because while early polls gave the yes camp a surprising lead, subsequently polling showed a marked shift in public opinion, and forecast the initiative’s rejection.
The biggest winner, of course, is the Swiss central bank: SNB policy makers warned repeatedly that the measure would have made it harder to keep prices stable and shield the central bank’s cap on the franc of 1.20 per euro. That minimum exchange rate was set three years ago, with the SNB pledging to buy foreign currency in unlimited amounts to defend it.
“The SNB can feel confirmed in its policy,” said Martin Gueth, economist at LBBW in Stuttgart. “By rejecting the gold measure, voters have come out in favor of its current stance.”

Referendums are a key feature of Switzerland’s system of direct democracy, and are held nationally and at a municipal level several times a year. The gold initiative was launched by a handful of members of the European Union-skeptic Swiss People’s Party. Uneasy about the more than 100 billion euros the SNB holds, they contend their initiative will strengthen -- not weaken -- the central bank’s credibility.

However, SNB President Jordan labeled the initiative “dangerous” and his fellow board member Fritz Zurbruegg said accepting the measure meant the room for maneuver “on currency reserves would be dramatically restricted, with negative consequences for the Swiss economy.”

The central bank, based in Bern and Zurich, would have faced a three-year deadline for repatriating its bullion from abroad and five to meet the 20 percent benchmark. With the European Central Bank poised to enact more stimulus to boost feeble growth and inflation, economists surveyed by Bloomberg News in a poll published on Nov. 19 had expected the SNB to maintain its ceiling on the franc into 2017.

The question now is what will happen to the Swiss France, which recently rose to a 26-month high against the euro. For many the concern that a successful gold referendum served as a catalyst to avoid going all in the CHF, as gold purchases would have weakened the currency. “If the euro crisis doesn’t get worse, then the minimum exchange rate will be defendable, said David Marmet, an economist at Zuercher Kantonalbank. Had the initiative been accepted, ‘‘instruments such as negative rates that don’t widen the balance sheet” would have been an option, he said.
With the referendum out of the way, the CHF may paradoxically find itself with a situation in which the inflows in the CHF force it to double down on defending the cap: economists have questioned whether the SNB will now find itself having to reinforce its cap with a negative interest rate on the cash-like deposits commercial banks keep with the central bank, making good on its threat to take further steps “immediately” if necessary.
And then there is the question of what happens to the tension in the gold swap market: as noted last week, the 1 Month GOFO rate had tumbled to the most negative in over a decade. It was not clear if this collateral gold squeeze was the result of Swiss referendum overhang or due to other reasons. The market's reaction on Monday should answer those questions.
Posted by Unknown at 1:07 AM