Speculators Have Never Been More Long The Dollar

After a brief hiatus the previous week, speculators have piled back into the most-over-crowded trade in the world - Long The US Dollar. As Goldman Sachs notes, overall USD speculative net long positioning increased $2.0bn to $45.7bn - a new record high. 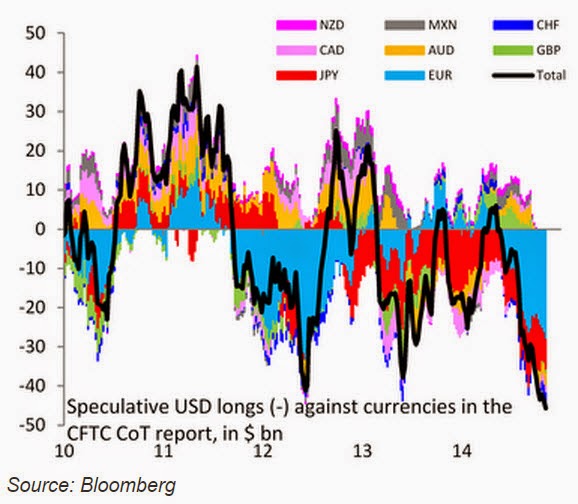 However, as JPMorgan reports, there is some divergences in the types of funds who are long or long-er...

*  *  *
King Dollar, however, is not all sunshine and rainbows, as SocGen's Michala Marcussen warns, beware the strong dollar paradox...

Recent currency movements have triggered nostalgia of the pre-crisis world when dollar strength was synonymous with a prosperous global economy. Hope today is that a strong dollar will cap US inflation, delay Fed tightening and boost exports to the US. To make an impact on US inflation significant enough to slow the Fed, we estimate, however, that EUR/USD would drop to 1.10, USD/JPY to 120 and USD/CNY to 6.50 to significantly shift Fed expectations. To our minds, moreover, such a scenario would only materialise if the growth gap between the US and the other major economies were to widen further.

Should recent dollar appreciation, moreover, breed complacency amongst policymakers elsewhere, this risk scenario could become a very painful reality. The paradox is thus that a strong dollar tantrum could be a more worrying scenario than a Fed tightening tantrum.

Several EM economies set to growth at a slower pace than the US: While the consensus growth outlook for the US has improved further in recent months, the opposite has been true for several other major economies, including the euro area, Japan and China. Moreover, our own forecasts remain generally below consensus with the exception of the US, where we are above. This view underpins our expectation of further dollar appreciation. Today, moreover, several EM economies are growing at a slower pace than the US. This is a notable difference from the pre-crisis era and has several implications. First, this lower global growth configuration is one reason why we believe that elasticities linking currency depreciation to growth may now be lower. The correlation between commodity prices and the dollar has also shifted. Finally, we note that capital flows are now moving in a very different pattern.

Dollar and commodities: The link between the dollar and commodity prices has seen several shifts over time. Already prior to the latest moves in currency markets, commodity prices were trending lower in parallel with Chinese growth forecasts. More recently, it seems that dollar depreciation may have been an additional factor driving prices lower. For commodity importers, this is helpful; for exporters, this marks yet a headwind.

Fed tightening may be a better scenario than a very strong dollar: Pre-crisis, in a simplified summary, the strong dollar can be described as having been driven by a global savings glut (mainly from the official sector in emerging economies) seeking a home in US Treasuries and, at the same time, US investors seeking risky capital abroad to profit from strong EM growth. It is also worth recalling that QE1 drove the dollar stronger and supported risky US assets as Treasuries rallied. QE2, on the other hand, saw dollar depreciation as US investors sought return in higher yielding asset abroad, and notably in emerging economies. As discussed above, we believe that a significant appreciation of the dollar relative to our baseline would be consistent with much weaker growth elsewhere.

In such a scenario, dollar would equate to further capital outflows, placing further pressure on already vulnerable economies. Indeed, a “dollar tantrum” scenario could well prove more painful than a “Fed tightening tantrum”, assuming the later comes with better growth in the rest of the world.