Gold prices: where they’re headed and how to profit

As far as investment and trading opportunities go, gold is currently the stock market’s poor cousin. No one really craves the yellow ore at this time. The reality is that unless you are looking for jewelry, there’s really no reason to buy the metal right now.
Back in September, when I last discussed the prospects for this precious metal, I wrote that “in the absence of further turmoil in Ukraine, gold prices could deteriorate to below $1,200, possibly even $1,180.”
The precious metal did bounce to the $1,225 level recently on concerns surrounding ISIS and the economic situations in both Europe and China. Since then, it has also collapsed to below $1,200 to $1,170 for the December contract.
Following the Federal Reserve’s recent elimination of its third round of quantitative easing (QE3) and its hinting at higher interest rates coming sometime in 2015, the metal is now at its lowest level since April 2010. The strong advance reading of the third-quarter gross domestic product (GDP) growth at 4.5% and the strong earnings growth in S&P 500 companies are also making us lean towards higher rates. With this, the greenback has been moving higher, which is hurting the demand for gold due to its denomination in U.S. dollars.
In addition, inflation, a supporter of gold, continues to look benign both at this time and as we move forward. The metal is used as a hedge against inflation and risk, so in the absence of these two key variables, I’m not surprised to see prices move lower on the charts. And it could worsen.
Moreover, the so-called positive impact of buying from India and China appears to be neutralized. The lead off towards Christmas is a major buying period for India, but don’t expect a strong surge in prices unless the country buys the entire Fort Knox gold reserve.
In fact, according to an article published by Bloomberg, in October, more than $1.3 billion left U.S. exchange-traded funds (ETFs) that focused on precious metals. (Source: Roy, D., “Gold Bulls Retreat With $1.3 Billion Pulled From Funds,” Bloomberg web site, November 3, 2014.)
On the charts, the breakdown at the psychological $1,200 level is bearish. Now, we could see a bounce back, but it would likely have to be triggered by a sudden swelling in geopolitical risk. The reality is that traders and investors are looking at equities at this time and not gold.
Gold is simply not desirable as a buy-and-hold investment; at this time, it should only be traded.
The precious metal’s break below $1,180 is bearish. Failure to rally could see gold move lower towards the technical support level around $1,125; alternatively, an oversold bounce could drive prices back up towards $1,200. A lot will have to do with the state of the global economy and geopolitical risk. 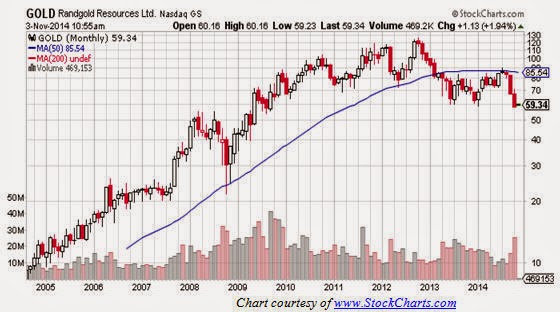 You can trade the uncertainty of gold via the use of a long option straddle on an ETF like SPDR Gold Shares (NYSEArca/GLD). This strategy would involve a two-legged trade via the buying of a put option and a call option with the same strike price and expiry. Through the use of this investment strategy, you make money should gold move enough in one direction or the other to cover the premium paid to initiate the trade.
by George Leong, B. Comm.
Posted by Unknown at 9:00 AM