CHARTS: Dollar destruction of commodity prices could be ending

The gold price drifted lower on Thursday falling below $1,200 and down nearly $10 overnight, hurt by a 6% slide in the price of oil.
The two commodities often move in tandem because cheaper crude leads to lower inflation, tarnishing gold attractiveness as a hedge against faster rates of price growth.
The fall in the price oil has given another boost to the US dollar. Commodities priced in US dollar usually have an inverse relationship to the world's reserve currency.
The greenback's rise to near five-year highs against a basket of currencies has pressurized not on the price of gold, but everything from copper and cotton to milk and molybdenum.
InvesTRAC passed on this price graph to MINING.com indicating that the US dollar's stunning run since May may be close to correcting.
The technical research and investment blog notes the advance from the May low has "unfolded in five waves which ought to be followed by a three wave correction":

The top of wave 5 seems to be tracing out a head and shoulders top and a dip through 87.50 would open the way to violate the uptrend and teat the bottom of wave 4 at 84.50. The technical picture shows InvesTRAC's short term direction indicator has turned down from an overbought situation with the forecaster showing weakness could be expected until the last week of December. So the stage is set for declining dollar and rising to soon get underway.

InvesTRAC believes the dollar chart confirms movements in the CRB Commodities index and that the decline in the broader commodities index from its June high was probably terminating after a 15.5% decline.

The InvesTRAC short term model shows that the OB/OS indicator has just begun to rise with the forecaster showing a rising ternd into early February. The daily chart below shows a 15 percent rise form the January lows which has more than been taken back by the second half slump…the index has ticked up slightly and is encountering the downtrend with a massive divergence on its RSI. My conclusion is that the worst is over and that we should now (or very soon) see the hard hit commodity prices lifting off their lows. 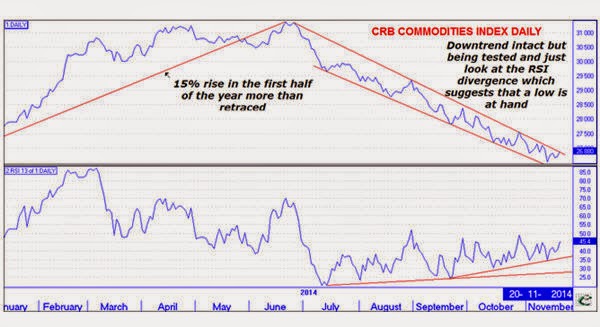