What The Swiss Gold Referendum Means For Gold Demand

The referendum for the Swiss Gold Initiative is scheduled for November 30th and the propaganda war - between the Swiss National Bank (SNB) and the Swiss Parliament on one side and the Swiss People's Party (SVP) on the other - has begun and we expect it to escalate as the day draws ever nearer. Having already questioned the 'location, location, location' of Switzerland's current gold stash, and examined the initiative in great depth here, JPMorgan notes that not only might the forthcoming Swiss gold referendum stabilize gold prices at a time when Gold ETF demand continues to decline, but warns, it also appears that markets under-appreciate this event.

Gold ETF flows continued to bleed losing $4bn or 6% of AUM cumulatively since the end of August. 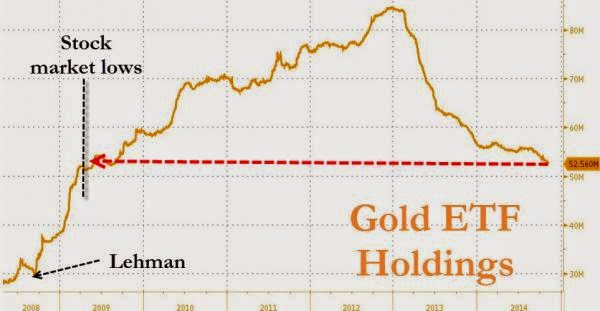 Gold Miners ETFs, which have held up relative well up until recently also suffered over the past two weeks (Figure 7).

The downtrend in Gold ETF flows represents a headwind for gold in the face of subdued physical demand recently.
The latest data from China Gold Association, reported physical gold demand by Chinese investors of only 185 tonnes in Q3, down from 246 in Q2 and 322 in Q1.
While Chinese physical demand remains subdued...

Who do you choose to believe?

The forthcoming Swiss gold referendum could stabilize gold prices at a time when Gold ETF demand continues to decline.

It also appears that markets under appreciate this event.

If the referendum is passed, the Swiss National Bank (SNB) will be forced to increase reserves by around 1,500 tonnes over five years, i.e. 300 tonnes per year.

*  *  *
As Grant Williams noted previously, with the establishment being unable to actively campaign AGAINST the Initiative, all has been quiet for many months; but with the dawning awareness that this little campaign might actually grow some legs, a few members of that establishment have been getting a little antsy...

(Centralbanking.com): ...Now, with less than two months until the vote, the central bank is intensifying its communication. It opened a “dossier” on its website yesterday where it will post materials outlining why it “reject[s] the initiative”.

“A telling example is our decision to implement the exchange rate floor vis-à-vis the euro... with the initiative’s legal limitation in place, we would have been forced during our defence of the minimum exchange rate not only to buy euros but also to buy gold in large quantities.

“Our defence of the minimum exchange rate would thus have involved huge costs, which would almost certainly have caused foreign exchange markets to doubt our resolve to enforce the rate by all means.”

Sometimes I think these people are completely delusional.
So, let me get this straight: gold is a relic which restricts your ability to do such vital things as... oh, I dunno, promise to print unlimited amounts of your currency in order to peg it to another, failing currency and thereby debase it by 9% in 15 minutes? Or it might mean the market doesn’t have complete faith that you might be completely relied upon to do really smart things like that?
Disaster!
Somebody. Please? Make it stop.
The Swiss establishment has been reliant upon the public’s ignorance in these matters, but now they are up against a formidable opponent in Egon von Greyerz. Not only that, but they can clearly see that, as elsewhere around the world, the public is fast becoming disenchanted with the status quo; and that is potentially very dangerous for these people.
What is important to understand here is that if the initiative passes it will be part of the Swiss constitution IMMEDIATELY — not in two years, as many blogs and websites are suggesting. This means that the government and parliament cannot touch it. Only another referendum can change it. This is proper democracy for you.
The closer we get to the vote on November 30, the bigger this story is going to become, and the bigger it becomes, the higher the chance that the yes vote wins.
Should that happen, it will undoubtedly set off alarm bells throughout the gold market, as yet more physical gold will need to be repatriated and another sizeable, price-insensitive buyer will enter the marketplace.
Posted by Unknown at 7:45 AM