After an uneventful week where gold stayed within striking distance of $1,200 an ounce, Friday saw another big move in the price in heavy volume.
The first gap down came right at the open, when a huge sell order of more than 1.2 million ounces dropped the price out of it's trading range.
Then around mid-day another series of trades took the price down to a day low of $1,163.90, a drop of 2.8% from yesterday's close.
For the session volumes were heavy with the most active contract trading the equivalent of 24 million ounces, almost double the three-month average.
A freefall in the price of oil – down 10% on the day – and doubts about the outcome of the Swiss vote on the country's gold reserves could partly explain the drop.
But the surprise scrapping of import duties by top gold consumer India should have buoyed the price. Even before the lifting of the curbs, India's import of gold rocketed and providing a floor for the physical market.
By the close of trade on the Comex division of the New York Mercantile Exchange gold for February delivery was changing hands not far off the lows at $1,165.80 an ounce, down $31.70. 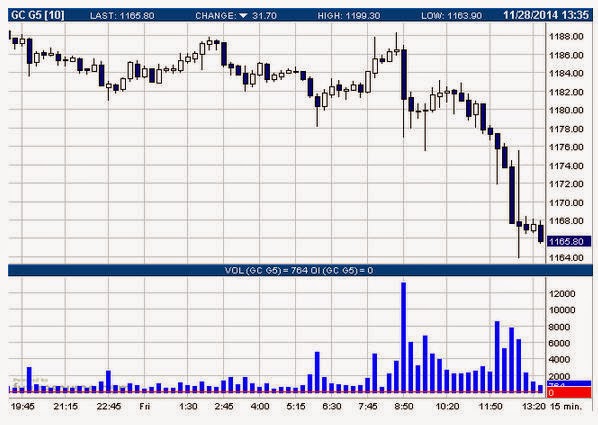