NATO Jets Surrounding Russia: Before And After

Based on the following "before" and "after" the Ukraine crisis pictures of NATO warplanes located just off the Russian border...
Before: 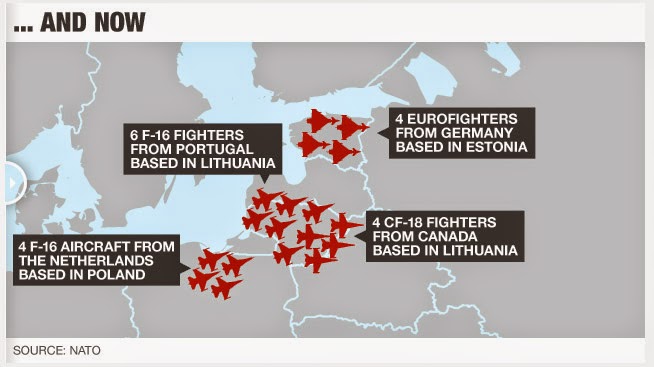 ... one can almost understand why Victoria Nuland was so eager to tell the EU to "fuck off" in her successful attemp to foment Ukraine unrest leading to the overthrow of ex-president Yanukovich, and destabilize the region, giving NATO a pretext for a major arms build up on the other side of the Russian border.
Per CNN, "There used to be only four jets ready to intercept Russian planes that crossed into European airspace. Now there are 18." And rising.
As for what the US response would be if Russia were to park a few squadrons of Mig-35s in Cuba, Canada and Mexico, we leave that to the reader's imagination.
Posted by Unknown at 8:32 AM