Physical Gold Shortage Worst In Over A Decade: GOFO Most Negative Since 2001

The last time there was an systemic physical gold shortage was in July 2013. It is then that, for the first time in 5 years, the 1-month Gold forward offered rate, or GOFO, went negative. We said:

Today, something happened that has not happened since the Lehman collapse: the 1 Month Gold Forward Offered (GOFO) rate turned negative, from 0.015% to -0.065%, for the first time in nearly 5 years, or technically since just after the Lehman bankruptcy precipitated AIG bailout in November 2011. And if one looks at the 3 Month GOFO, which also turned shockingly negative overnight from 0.05% to -0.03%, one has to go back all the way to the 1999 Washington Agreement on gold, to find the last time that particular GOFO rate was negative. 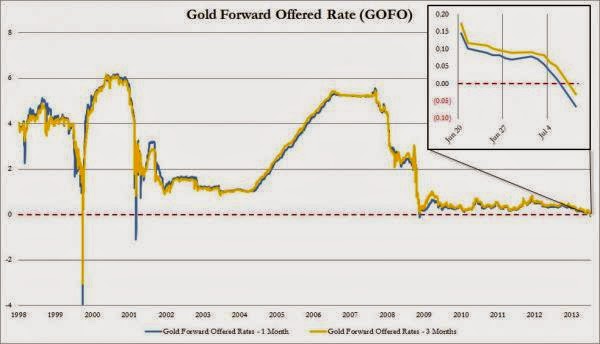 Fast forward to today, when as noted over the past week there has been a massive shortage of precious metals - most notably silver which as of this moment is indefinitely unavailable at the US Mint - as a result of the tumble in the paper price, and following 8 days of sliding and negative 1 month GOFO rates, today the physical metal shortage surged, as can be seen by not only the first negative 6 month GOFO rate since last summer's much publicized gold shortage when China was gobbling up every piece of shiny yellow rock available for sale, but a 1 month GOFO of -0.1850%: the most negative it has been since 2001!

Said otherwise, the physical shortage is the worst it has been in over a decade, even as the price of paper gold continues to drop!
And for those for whom the topic of GOFO inversion is new, here is how we described the situation last time:
* * *
What is GOFO (Gold Forward Offered Rates)?
GOFO stands for Gold Forward Offered Rate. These are rates at which contributors are prepared to lend gold on a swap against US dollars. Quotes are made for 1-, 2-, 3-, 6- and 12-month periods.
Who provides the rates?
The contributors are the Market Making Members of the LBMA: The Bank of Nova Scotia–ScotiaMocatta, Barclays Bank Plc, Deutsche Bank AG, HSBC Bank USA London Branch, Goldman Sachs, JP Morgan Chase Bank, Société Générale and UBS AG.
When are the rates quoted?
The means are set at 11 am London time. These are the rates shown on the LBMA website.  To show derived gold lease rates, the GOFO means are subtracted from the corresponding values of the LIBOR (London Interbank Offered Rates) US dollar means.  These rates are also available on the LBMA website.
How are the GOFO means established?
At 10.30 am London time, the Reuters page is cleared of all rates. Contributors then enter their rates for all time periods. A minimum of six contributors must enter rates in order for the means to be calculated. At 11.00 am, the mean is established for each maturity by discarding the highest and lowest quotations in each period and averaging the remaining rates.
What are some uses for GOFO means in the market?
They provide a basis for some finance and loan agreements as well as for the settlement of gold Interest Rate Swaps.
* * *
Unpleasant similarities with Libor and most other fixed (literally and metaphorically) rates aside, what is known is that under normal market conditions, GOFO is always positive, or in other words gold serves as a money-equivalent collateral for a pseudo-secured loan against paper fiat (USD in this case) hence the low interest rate.
Sometimes, however, normality inverts and the rate goes negative and as such serves as a useful indicator of gold market dislocations. Thus, while disagreements exists, one can safely say that what GOFO is, is simply a blended indicator of liquidity, counterparty or collateral (physical availability) stress in the gold market. Since it is next to impossible to isolate just which component is causing the indicated disturbance, it is prudent to be on watch for all three.
The best known example of a complete collapse in the GOFO rate, is the September 1999 Washington Agreement on Gold, which in brief, was an imposed "cap" on gold sales (mostly European in the afteramth of Gordon Brown's idiotic sale of UK's gold) to the tune of 400 tons per year. The tangent of the Washington Agreement is quite interesting in its own right. Recall the words of Milling-Stanley from the 12th Nikkei Gold Conference:

"Central bank independence is enshrined in law in many countries, and central bankers tend to be independent thinkers. It is worth asking why such a large group of them decided to associate themselves with this highly unusual agreement...At the same time, through our close contacts with central banks, the Council has been aware that some of the biggest holders have for some time been concerned about the impact on the gold price—and thus on the value of their gold reserves—of unfounded rumours, and about the use of official gold for speculative purposes.

"Several of the central bankers involved had said repeatedly they had no intention of selling any of their gold, but they had been saying that as individuals—and no-one had taken any notice. I think that is what Mr. Duisenberg meant when he said they were making this statement to clarify their intentions."

Of course, this happened in a time long ago, when the primacy of Fractional reserve banking was sacrosanct, when the first Greenspan credit bubble (dot com) was yet to appear, and when barbarous relics were indeed a thing of the past, only to be proven oh so contemporary following not one, not two, but three subsequent cheap-credit bubbles which have vastly undermined the religious faith in fiath and central banking, sending the price of gold to all time highs as recently as 2011.
Another subsequent negative GOFO episode occurred in early 2001, which coincided with what has been rumored to be a speculative attack and reversal of the futures market. However, while pushing 1 month rates negative, 3 month rates remained well positive.
Indeed, the only other time when both 1M and 3M GOFOs were both negative or almost so (3M touched on 0.05%) was in the aftermath of the AIG bailout following the Lehman collapse in November 2008.
Fast forward to today, when all GOFOs, from 1M all the way to 6M just went negative.
And while both Antal Fekete and Sandeep Jaitly, traditionally two of the most vocal pundits in the arena of gold backwardation and temporal and collateral gold market arbritrage, are likely come up with their own interpretations of what may be causing this historic inversion, the reality is that one can't know for sure until after the fact. It may be one of many things:
The answer for now is unknown. What is known is that something very abnormal is once again afoot at the nexus of the gold fractional reserve lending market.
Posted by Unknown at 7:51 AM