While the aluminium price was the strongest price performer among industrial metals in July, zinc again enjoyed a stellar month, rising almost 8% over June.
The price of zinc rose to a near-three year high of $2,416 a tonne last week as the base metal continues to benefit from expected supply cuts due to the scheduled closures of Australia's Century, Namibia's Skorpion and the Lisheen mine in Ireland.
Lisheen and Black Mountain, both controlled by London-listed Vedanta, also suffered production disruptions this year, further boosting the price of the base metal.
While zinc inventories have pulled back some 30% this year warehouse stocks remain relatively high at more than 655,000 tonnes compare to the long-run average of around 500,000 tonnes since 1990.
Last week levels also ticked up for the first time in months, which saw the metal fall back below $2,400 a tonne.
Another factor clouding the supply issue is the use of commodities as collateral for trade credit in China – responsible for 40% of base metal demand. Beijing is clamping down on the practice as it tries to curb its shadow banking system and after a scandal involving such deals at a major port.
While zinc is not as widely used in financing deals as copper, some 250,000 tonnes of zinc is currently being held in Chinese bonded warehouses according to research house Capital Economics.

The latest data from the International Lead and Zinc Study Group also show that mine supply continued to increase in the first four months of this year, growing by 6.8%. Nevertheless, Australia's government commodities researcher, BREE, estimates global deficits of 190,000 tonnes in 2014 and 116,000 tonnes in 2015, as no new major mines are due to be commissioned to replace the lost output."People are asking questions about whether zinc has any further upside. We have been saying that the price has escaped the fundamentals. It's overextended and it's got a correction due," analyst Vivienne Lloyd at Macquarie in London told Reuters on Thursday.

On the demand side the forecast also remains positive.
China has been able to lift manufacturing activity in the country to a 27-month high with targeted stimulus measures while Europe, which buys 20% of global zinc supply, along with Japan is expected to boost demand particularly in the automotive sector and for use in value-added steel products galvanised with zinc.
Sister metal lead gained 4% in July, but has not benefited to the extent of zinc this year, despite the fact that zinc mine closures in 2015 will also negatively affect lead supply. 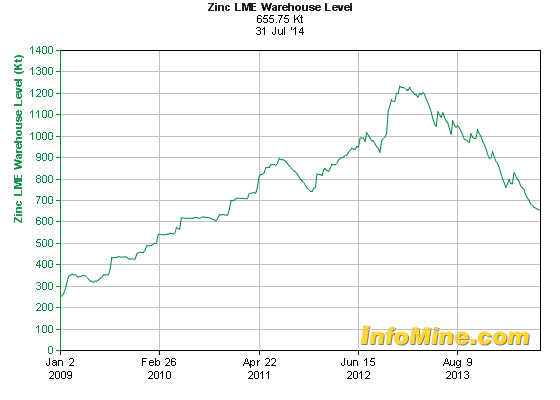