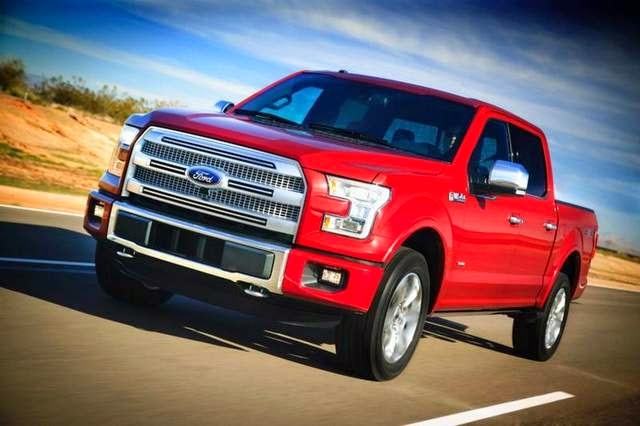 Novelis, a global aluminum supplier, is seeing a 45-year-old dream come true as the auto industry is on the cusp of making the lightweight material mainstream.
Novelis is supplying aluminum for the 2015 Ford F-150 that goes on sale later this year. The supplier is expanding its Oswego, N.Y. plant, for a third time and Ford can use everything it can make.
For 40 years prior to 2009, the amount of aluminum on vehicles increased by about seven pounds a year, said Tom Boney, a general manager for Novelis North America.
First it was hoods, then doors and liftgates. A few luxury automakers were bold enough to offer aluminum frames and body panels on selected models. But when it came to the full body, steel remained the metal of choice.
“We just kept plugging away,” Boney said. “We were always the bridesmaid, never the bride.”
There were times when the executives thought a breakthrough was nigh. For example, Novelis worked with Ford on an aluminum Taurus in the 1990s.
“We thought it would be it,” Boney said. But it was not to be.
So when Ford and Novelis started talking in 2009 — facilitated by Novelis CEO Phil Martens, a former Ford executive, and Ford’s former CEO Alan Mulally’s knowledge of aluminum from his time at Boeing — the aluminum F-150 evolved from dream to reality.
Ford makes about 700,000 F-150s a year and starting with the next-generation light-duty truck they will all have aluminum bodies. With reports that General Motors’ next generation of pickups, Chrysler’s next Jeep Wrangler and maybe Ram pickup could all shift to aluminum, Novelis is positioned well for the industry’s next big trend.
Like most overnight successes, it was years in the making.
“It has been a 40-year journey for the aluminum industry,” Boney said.
By 2025, 18% of all vehicles will have all-aluminum bodies compared with less than 1% now, according to a recent report from Ducker Worldwide, which examines material trends.
Pickups are leading the charge, partly because they must achieve big improvements in fuel economy in the next decade. Ducker estimates by 2025, 70% of pickups will be aluminum intensive.
Drilling down into Ducker’s data, 46% of doors will be made of aluminum by the middle of next decade, up from 3-5% now; and 85% of hoods, more than double today’s 35%.
“It’s a pretty exciting time and with the alloys we have, we don’t think we’ve arrived yet” at the best alloys for future weight reductions, Boney said.
Novelis has taken a giant step with the development of a military grade alloy that can be produced in high volumes.
The unique alloy was developed specifically for the auto industry, said Todd Summe, Novelis director of automotive technology.
Novelis is already working on its next set of aluminum vehicles for 2019. Neither Boney nor Summe would confirm they are the GM trucks.
Summe said future vehicles will have an even greater mix of materials, including layers of different alloys, gauges and thicknesses in a single component.
To meet the growing demand, Novelis has quadrupled its potential production and hired almost 1,000 people at its Oswego plant. There are two lines now and construction began in June on a third line to be ready next year. It will bring North American capacity to 400,000 metric tons a year and represents an investment of about $500 million in recent years.
“All that capacity was installed on known purchase orders,” Boney said, “so we are all sold out.”
But if more customers commit to broader aluminum use, “we are able to step up to the challenge.”
Recycling is also key. Novelis will sell coils of aluminum to Ford. As much as 50% becomes waste in the stamping process. Ford will save the scrap, separate it by alloy and give it back to Novelis to use in producing new coils.
Novelis has a target of using 80% recycled aluminum by 2020 through relationships like the one with Ford, up from 43% last year, said Summe.
The Novelis executives are not worried that truck buyers will shy away from the F-150 and deflate the momentum aluminum is picking up.
“Ford has done its homework and the industry has done its work.” Boney said.
Summe agrees.
“Our confidence level is very high,” he said.
Posted by Unknown at 8:10 AM