Natural Gas as a Trucking Fuel Fails to Deliver

Much has been made of the potential for natural gas as a fuel for the trucking and rail industries.
The dramatic fall in natural gas prices in recent years has spurred investment in refueling stations for the road trucking industry and forced the rail industry to review their position regarding the economics of using natural gas either as compressed natural gas (CNG) or as liquefied natural gas (LNG) to replace diesel fuel.
So far, though, in spite of US natural gas prices that are a third of global levels, substitution has been limited. Presently, natural gas used as transportation fuel constitutes only about 0.1 % of total US consumption. According to a report, about 18 months ago half of that amount was consumed in California alone. A majority of states use less than 2 million cubic feet per month, and 11 states don’t use any according to this report. California remains, by far, the largest adopter according to EIA data as this recent graph shows and the agency reports for 2013 road transporttaion still only made up 0.126% of natural gas consumption. So, while there has been a lot of development work among engine builders and government agency support for specific programs, wider uptake remains slow. 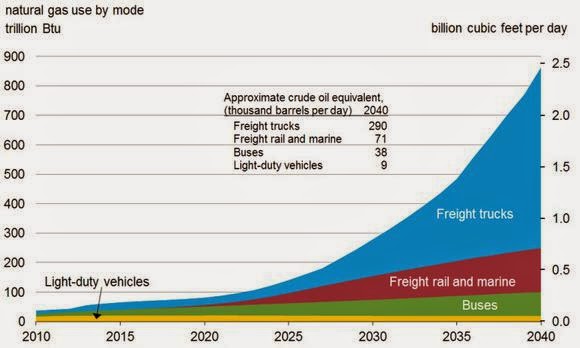 The argument on purely economic grounds looks compelling at first sight, but on closer examination upfront capital costs and worries about longer-term price competitiveness are overlaying a still limited refueling infrastructure to deter widespread investment.
As an example, using federal government estimates the report assumes that a typical American family puts 12,000 miles on a car. At 25 miles per gallon, they will consume 480 gallons/year, resulting in a cost of about $1,920 at $4 a gallon. Natural gas at an equivalent price of about $2.50/gallon would save the family $720 a year. However, if that savings comes at the cost of a $10,000 vehicle purchase price premium it is no more compelling than that for electric cars with similarly high upfront costs – government subsidies excepted.
The article goes on to apply the same general consideration to high upfront costs of heavy LNG trucks, currently amounting to about $90,000 more than traditional diesel-powered versions. As with CNG cars, this is in part because they aren’t yet being mass-produced. On the other hand, the article goes on, those trucks log a lot more miles than cars, and the accumulated fuel savings should provide enormous business benefits over the long haul.
The energy density of CNG and even LNG is less than for diesel, by 6:1 for CNG and 1.7:1 for LNG making fuel bulk and weight an issue. Natural gas however does burn more cleanly, extending vehicle life, reducing maintenance costs and reducing emissions. Specifically, natural gas is said to cut carbon monoxide emissions by an estimated 90%-97%, nitrogen dioxide emissions by 35%-60%, and carbon dioxide emissions by an estimated 25%-30%. The reduction in emissions, is what is driving federal incentives to adopt the fuel, and explains why California is so far ahead of everywhere else in terms of uptake.
The vagaries of government support aside the greatest threat to LNG or CNG adoption as a trucking fuel, though, could be a dilution of the current cost argument. Natural gas prices may be low now but will they remain low? Australia’s example says they will not, a Motley Fool article points to Australia’s natural gas bonanza spurring the development of export facilities and the rise of domestic prices to compete with supplies being sent to the lucrative Asian market. Pressure from oil and gas firms in the shale gas market to export could equally level US prices to a point closer to world prices. The oil-to-gas ratio has already fallen in the US from 7:1 in 2012, and is expected to reach to 3.4:1 by 2018.
In the long term, the price advantage enjoyed by US consumers for both oil and gas will almost certainly reduce as imports fall and exports rise. Taken together, the potential rise in natural gas prices coupled with the capital costs of converting from diesel to natural gas may not favor a long-term conversion of fuels in the trucking industry and may explain why the rail industry is moving very cautiously in converting existing locomotives or ordering new one’s outside of specific rail road/client programs.
Posted by Unknown at 9:30 AM