"Soros Put" Rises To Record: Is The Billionaire Investor Betting On Market Crash?

Back in February we observed, with some surprise, when Soros Fund Management, the investment vehicle of the famous Hungarian billionaire investor revealed in its Q4 13F that the firm had taken its bearish S&P 500 ETF - aka SPY - put exposure to a then record $1.3 billion notional, prompting us and many others to ask if Soros was preparing for a market crash. Fast forward to today when following the latest 13F disclosure from the same fund, we note, with double the surprise that a quarter after the same ETF put was lowered to "only" $299 million notional, Soros has once again increased his total SPY Put to a new record high of $2.2 billion, or nearly double the previous all time high, and a whopping 17% of his total AUM. 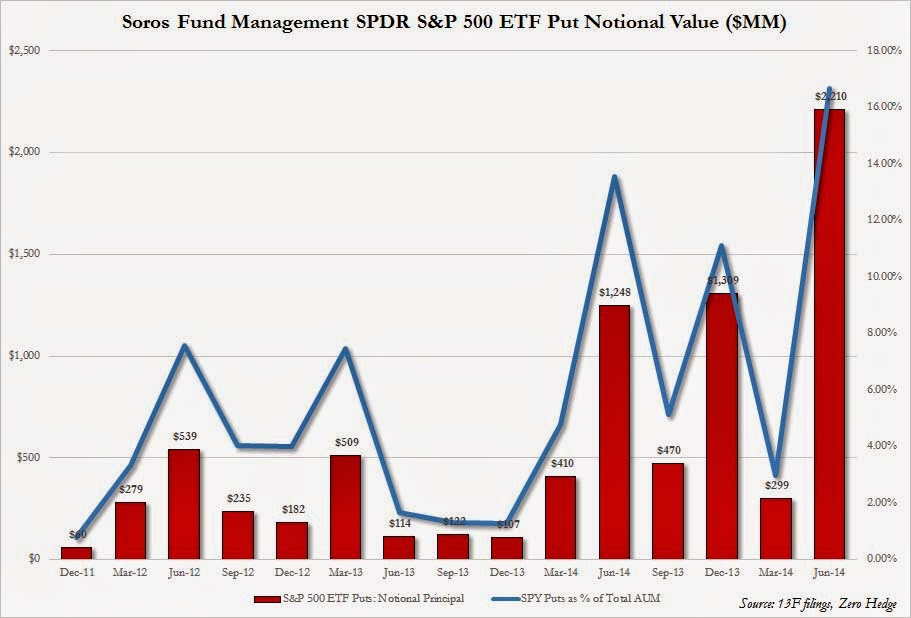 Some observations, which we presented previously: the "Soros put" is a legacy hedge position that the 84-year old has been rolling over every quarter since 2010. Since this was an increase of 638% Q/Q this has some people concerned that the author of 'reflexivity' and the founder of "open societies" may be anticipating some major market downside.
Furthermore, remember that what was disclosed yesterday is a snapshot of Soros' holdings as of 45 days ago. What he may or may not have done with his hedge since then is largely unknown, and since there are no investor letters, there is no way of knowing even on a leaked basis how the billionaire has since positioned for the market.
Then again, considering that not only Yellen, who has warned about bubble pockets in stocks, but the BIS, Icahn and numerous other fund managers, now openly warn that the entire market has entered bubble territory, perhaps this is a case where the simplest explanation is also the right one...

Sourced from ZeroHedge
Posted by Unknown at 3:54 PM