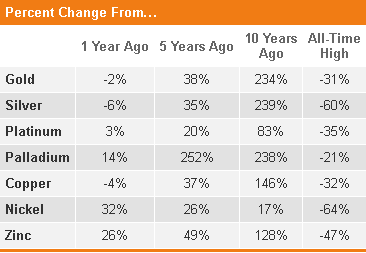 The huge rally in nickel prices has prompted many companies to restart operations at idled mines. Australia based Avebury Nickel Mines Ltd, Poseidon Nickel Ltd and Panoramic Resources Ltd have announced reopening of nickel deposits to cash in on the rally in nickel prices. More global producers are expected to follow suit.
Perth-based Avebury has announced plans to restart its nickel deposits in Tasmania after being shuttered for nearly six years. The company expects to make new investment of nearly $20 million to reopen the mine which is expected to produce nearly 12,000 tons of nickel concentrates per annum. The facility is expected to restart during early-2015.
Poseidon is reportedly mulling over plans to restart operations at a Western Australian nickel mine. Panoramic Resources too have announced plans to restart mining operations at its Copernicus deposits. According to Norilsk Nickel, the up trending Nickel prices may result in many global firms switch over to mine restarts.
Nickel prices have rallied 56% in 2014, following the ban imposed by Indonesian government on nickel exports from the country. According to analysts, the output from restarted mines would not be sufficient enough to prevent nickel from falling into global deficit. The consensus price forecasts by several agencies hint at nickel prices rallying further to $25,000 a metric ton from the current levels.
Posted by Unknown at 11:39 AM