ISIS Gets Angrier At America: "We Will Drown All Of You In Blood" 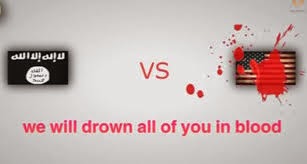 Over the past month ISIS has been getting angrier (""God Willing, We Will Raise The Flag Of Allah In The White House" - A Deeper Look Inside ISIS") and angrier ("ISIS Issues Threat To White House; Secret Service Taking "Appropriate Steps") until today it released a video in which it warned the United States it will attack Americans "in any place" if continuing US raids hit its militants. The video, released by Reuters, which shows a photograph of an American who was beheaded during the U.S. occupation of Iraq, featured a statement which said in English "we will drown all of you in blood".
But while we get the anger of the Islamic State, be it real or staged, now that the US has allegedly retaken the Mosul dam, one wonders how a terrorist organization with over half a billion dollars in funding, a state of the art "made in the US" weapons arsenal, and glossy year-end profit & loss reports, can't afford to spend a few dollars on the production quality of its propaganda videos, especially if as the rumors suggest not one but several key "developed world" intelligence outlets are pulling the ISIS strings.
Posted by Unknown at 10:59 AM