The Technical Pattern of Lead is Changing, Turning to Bullish?

The three-year bear market for industrial metals seems to be ending. Every base metal hit its price target this year, with the exceptions of copper and tin, which still need to prove themselves. Historically industrial metals tend to move in tandem since they have many drivers in common. This makes us wonder: will lead follow?
The lead market seems to be in deficit. As my colleague Stuart Burns pointed out last month:
“The lead market was in deficit by 41,000 tons in January to April 2014, according to the World Bureau of Metal Statistics, following from a deficit of 276,000 tons recorded in all of 2013. Total stocks at the end of April were 35,000 tons lower than at the end of 2013 even though LME inventory is roughly at the same level as the start of the year after a sharp uptick in inflows at the end of last month”
That deficit hasn’t been translated into significantly higher prices yet, however the picture is changing. 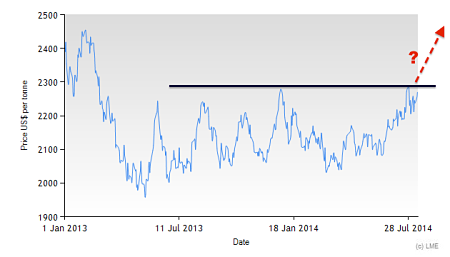 3M LME Lead price since 2013
The technical patter is bullish. Lead is about to break resistance levels and, if it does, we would expect it to make multiyear highs in the near term. Interestingly, we already warned of a similar behavior in zinc during June and, right after our call, it surged 12% in only two months.
What This Means For Metal Buyers
The technical picture is turning bullish, with a market in deficit and the base metal sector trending higher, it seems like a great time to hedge your lead purchases as soon as lead hits new ground.
Posted by Unknown at 8:04 AM