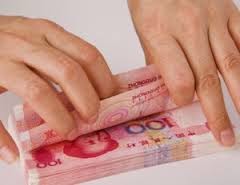 China's central bank on Wednesday decided to lower the reserve requirement ratio (RRR), the minimum level of reserve banks must hold, by 50 basis points from Feb. 5.
The People's Bank of China (PBOC) also increased support to some target areas, cutting the RRR by an extra 50 basis points for certain commercial banks engaged in proportionate lending to small firms, the farming sector and major water projects, said the central bank's statement.
The Agricultural Development Bank of China, the sole policy lender for agriculture, gets an RRR reduction of 4 percentage points.
Currently, big banks must hold 20 percent of their deposits in reserve, while the ratio for small and medium-sized banks is 16.5 percent.
The move came days after the purchasing managers' index, a main gauge of manufacturing activity, fell below the 50-point mark for the first time since October 2012, a sign of a weakening economy. The world's second largest economy grew at the slowest rate for 24 years in 2014.
The PBOC said that it would "continue a prudent monetary policy, striking a balance between being tight and loose, guiding monetary credit and private financing to grow steadily and moderately, promoting a healthy and steady economy."
The central bank cut benchmark interest rates for the first time in more than two years in November 2014.
Posted by Unknown at 8:12 AM