Custom Duty on Gold will be Reduced From 10% to 6% Likely on Budget Day. 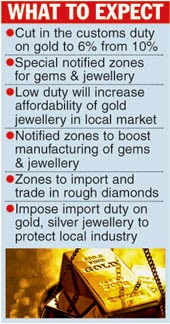 The government is likely to announce a reduction in the customs duty on gold and the setting up of special notified zones for gems and jewelry in the budget.

The customs duty on gold is likely to be brought down to 6 per cent from 10 per cent in the wake of a significant decline in the import of the yellow metal.

The setting up of notified zones will boost the manufacturing of gems and jewellery, which is one of the sectors identified in the "Make in India" programme of the Narendra Modi-government.

"Gold imports are declining continuously. The gems and jewellery sector contributes significantly to the country's total exports. On account of this, we are expecting a cut in the import duty," commerce ministry officials said.

Gold imports in December declined to 39 tonnes from 152 tonnes in the previous month. The export of gems and jewellery has fallen 3.73 per cent year-on-year to $3 billion in January.

"The low duty will curb the smuggling of precious metals, increase affordability of gold jewellery in the domestic market and enhance the cost-competitiveness of gold jewellery manufacturers in the export market," analysts said.

The gems and jewellery sector, which employs about 3.5 million people, accounted for almost 13 per cent of exports in 2013-14.

The sector is one of the 25 areas identified under the "'Make in India" programme, which aims at attracting domestic and foreign investments to boost manufacturing and create jobs.

The notified zones would also import and trade in rough diamonds.

"The mining companies will be taxed to the extent of invoices raised to Indian companies, eliminating middlemen involved in the trade. This will help India to become a rough diamond trading hub, and especially help small diamond polishing units in India," CARE Ratings said in a research note.

In the run-up to the elections, the BJP had promised to ease restrictions on gold imports as the curbs had led to smuggling. Modi had said any action on gold should take into account the interest of the public and traders and not just economics and policy.
Posted by Unknown at 10:17 AM