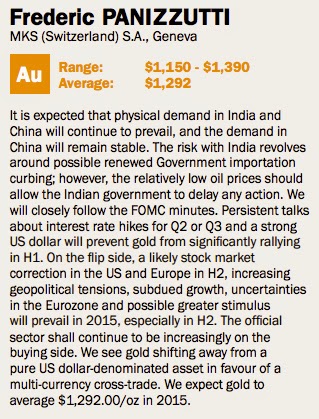 Gold price weakness returned on Tuesday as improving prospects of a Greek debt deal dampens safe haven buying and a rise in bond yields in the US make the metal less attractive as an investment.
In afternoon trade on the Comex division of the New York Mercantile Exchange gold for April delivery shed 0.7% or $8.90 to exchange hands at $1,232.60 an ounce, not far off its lows for the day.
Gold's 2015 gains – the metal is still up nearly 4% or over $48 since the start of the year – have been ascribed to safe haven buying amid the West-Russian standoff over Ukraine, a slowing global economy and a debt crisis in the Eurozone.
A stronger than expected jobs report in the US on Friday provided a boost to equities and caused a bounce in bond yields, with benchmark US treasurys on Tuesday scaling 2% for the first time in a month. Higher yields raises the opportunity costs of holding gold because the metal provides no income.
Higher rates also boost the value of the dollar – already trading at multi-year highs – which usually move in the opposite direction of the gold price.

India and China are not buying right now, our books are not full

On Tuesday the greenback edged higher staying in range of 12-year highs against the currencies of major US trading partners hit late January. The dollar index has strengthened by more than 17% over the last year.
Platts quotes the CEO of MKS Frederic Panizzuti as saying that concern about global risks is the main driver of the gold price:
"We have put fundamentals aside in our gold outlook for 2015," Panizzuti said. "Geopolitics, the perception of risk and even emotional risk from investors are the main drivers this year."
Swiss-based MKS is one of the world's largest refiners and Panizzuti said this year's rise in the gold prize has been largely Exchange Traded Funds investing in the precious metal rather than physical demand that has driven the market:
"India and China are not buying right now, our books are not full. But we expect to see some buying from March and April onwards."
Panizzuti was the winner in 2014 of the London Bullion Market Association's gold forecasting contest with his estimate of $1,262 per ounce for the year with the actual average over the 12 months of $1,267.
For this year Panizutti is the second most bullish of the 35 analysts with an annual average prediction of $1,292 per ounce and a range of $1,150 and $1,390.
Overall the LBMA survey indicates gold will trade in a narrow band this year to average $1,211 a troy ounce with a range between $1,085 and $1,356 during 2015.
Posted by Unknown at 9:41 AM