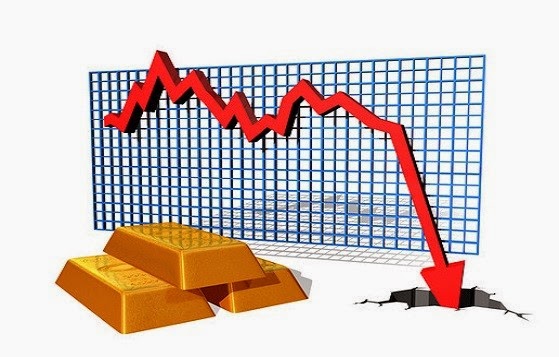 * U.S. nonfarm payrolls increase 257,000 in January
* Dollar boosted by higher U.S. Treasury yields
* China 2014 gold consumption fell by a quarter
(Reuters) - Gold fell more than 2 percent on Friday as global stock markets and the dollar rose on stronger-than-expected U.S. jobs data, raising expectations that the Federal Reserve will increase interest rates by midyear.
U.S. nonfarm payrolls increased by 257,000 last month, topping expectations for 234,000, with the unemployment rate ticking up to 5.7 percent due to more people entering the labor force.
"The U.S. employment report was good and there has been quite a sharp adjustment in interest rates expectations, with 10-year Treasury yields up 10 basis points," ABN Amro analyst Georgette Boele said.
"I expect lower precious metals prices for the next six months up to the moment the U.S. really starts hiking interest rates."


Spot gold dropped to a three-week low of $1,228.25 an ounce earlier and was down 2.4 percent at $1,234.70 an ounce by 2:02 p.m. EST (1902 GMT), its biggest fall since Dec. 15. It has lost 3.8 percent so far this week, which would be its largest fall since the week ended Oct. 31.
U.S. gold for April delivery fell 2.2 percent to settle at $1,234.60 an ounce.
"If nothing else changes, earlier hikes in interest rates by the U.S. central bank would be likely to undermine the prices of precious metals, notably gold and silver," Capital Economics said in a note.
"If Fed tightening is gradual and interest rates remain low by past standards, as we expect, there would be plenty of scope for other, more positive factors to dominate."
The dollar rose 1.2 percent against a basket of leading currencies, helped by a rise in the benchmark 10-year U.S. Treasury yield to more than 1.9 percent. Wall Street rose and European equities hit a seven-year high.
"The negative pulls for gold are the elevated speculative positions, hawkish Fed and stronger dollar, while the lowering of the reserve requirements in China, negative yields in most European countries and uncertainty in Greece lend support," Saxo Bank senior manager Ole Hansen said.
Elsewhere, holdings at SPDR Gold Trust, the world's largest gold-backed exchange-traded fund, rose on Thursday to 24.86 million ounces, the highest since September.
China's gold consumption fell 24.7 percent to 886 tonnes last year even as output from the world's top consumer climbed 5.5 percent, the China Gold Association said.
Spot silver slid 3.7 percent to $16.62 an ounce. Platinum was down 2.6 percent at $1,218.
Posted by Unknown at 11:56 AM