Copper & Crude Convolutions: "The More This Goes On The More It Looks Like 1937"

The primacy of the monetary pyramid in 2015 is not really about money as it is all ideology. If you believe that monetary policy provides “stimulus” then you immediately remove all thoughts of any economic decline during times when monetarism is most active. Since “it works” then all else must fall into place. Contrary indications are thus given extraordinary lengths to maintain logical consistency.
Economic commentary as it exists is incredibly short-sighted, though there is no reason to believe that is anything other than exactly what I stated above. The state of economics even as a discipline has internalized Keynes so deeply that all that matters is what happens month-to-month. That makes it easier to maintain the status quo of opinion about “stimulus” – in the short run it is very easy to find a suggestion for something behaving “unexpectedly.”
That was certainly the case with crude oil prices these past few months, as the initial impulse was uniformly and incessantly prodded to over-supply. Again, the reasoning behind that was simply since “stimulus” works and it was being practiced and replicated all over the world there was no possible means by which “demand” might drop, and so precipitously. After a few weeks of oil “unexpectedly” falling further, re-assurances were more difficult and increasingly derivative by nature.
The parallel excuse was that oil prices were oil prices and that very little else “important” was behaving as was crude. And whatever commodity prices were falling in parallel fashion, that was distilled as being nothing more than either an oil “echo” or supply everywhere. This was written in November 2014:

The simple reason for the dip in commodities prices, these experts say, is that we have too much of a good thing: too much gold; a bumper crop of corn; a glut of iron ore because the big three producers, Rio Tinto, Vale and BHP Billiton have all increased output. In crude oil, members of the Organization of Petroleum Exporting Countries keep pumping out oil, while US production is at its highest level since 1986…

That lack of demand is why the commodity markets aren’t forecasting bad times in the future; they’re mirroring the current dark “mood” of the commodity investor, said analysts at Citi Research in a research note from 16 November.

The article should have just come right out and stated the central theme: commodity “investors” are in a “dark mood” because the world is so good right now. And while that may hold some minor plausibility on the surface, it is, again, far too narrow and focused solely on this moment. Even if commodity prices were, in fact, trading only on over-supply, therein lies the seeds of the next economic problem anyway. What factor in this economic world would lead to such an imbalance in the first place?
After all, businesses are supposed to be set on expectations for future conditions, and this narrative more than suggests that they were decidedly bad at doing so. Producers that so over-produce themselves into big trouble are either really stupid, or led astray by prices that, at their core, don’t make fundamental sense.
In other words, even if you follow this tendency to excuse “unexpected” weakness, it still amounts to largely the same problem – an artificial “boom” predicated on artificial prices rather than something more fundamentally sound and thus sustainable. It all ends up in the same place as an imbalance that will have to be cleared via retrenchment; a fact that is missed in the euphoria of “this month is compared only to last month.”

One reason Haworth said he’s not worried about a bigger global recession is the behavior of copper prices. Because the red metal has many industrial uses, commodity watchers will sometimes say copper has “a PhD in economics”, and it can be a gauge of future industrial demand. US copper futures prices have dipped below $3 a pound on rare occasions in 2014, but it’s always bounced back up. Prices currently are around $3.04.

Haworth called that “heartening” and posits copper prices are suggesting that while global growth is not strong, it’s not falling apart.

“In order for me to become worried about a recession, I think we’d need to see a much bigger fall in the price of copper and that’s not happening,” Haworth said. [emphasis added]

Almost immediately upon having those words printed, the price of copper declined below $3 and has remained lower ever since; in fact still falling further even now. I don’t profess to know at what price Mr. Haworth would consider low enough to change his global recession stand, but in wider context it is clear that the possibility has already been more than suggested. 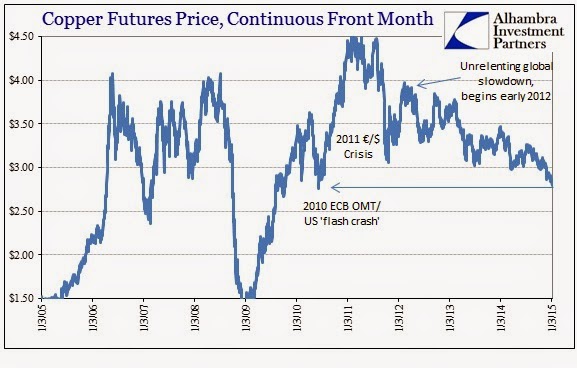 As of this morning, the front month futures price of copper delivery is almost exactly the same price as it was in June 2010 at the lows when recovery after the Great Recession was very much in doubt – leading to QE2 and the last great “rip” in commodity prices (as if that were a good thing). It only matters that copper prices are not wholly collapsing right now, in scale closer to what happened starting July 2008, if your view of the world is temporally tapered. Taking a longer view, copper prices have been falling since the 2011 apex of the $/€ crisis, with the longer-term trend established in early 2012 as global growth (demand) has done nothing but wane.
In a physical world where supply and demand have to clear at some price, it is not really surprising that a slow attrition in economic activity would show up as a much more durable and extended slide in not just copper, but almost every economically-sensitive commodity. Since that trend includes the beginning and end of QE 3 & 4, as well as innumerable “stimulus” programs in Japan, Europe, China and elsewhere, with nary a durable upward impression, it speaks very ill of the impact of monetarism on actual “demand”, even if it were “over-supply.” The mainstream impression of all of this is one of independent and discrete trends with no unifying nature. That fits the idea that “market” prices can be as they are without disrupting the narrative of an economy on the upswing. But the financial system, especially globally, does not behave as a segregated and compartmentalized price engine – and certainly not for extended periods. The fusion of all these pieces, and why crude collapse is really indicative of the underlying trend, is, of course, the “dollar.” In a globalized and financialized world, financial disruption, which is what a “rising” dollar signifies, is not an independent paradigm. The more prices trend exactly opposite of how “stimulus” is supposed to work, the less these convolutions will hold up whereby, eventually, reality sets in. The significance of the action in December is that there are no more lines in the sand left to defend the “honor” of monetarism; copper isn’t anywhere near $3 anymore and the long-predicted crude oil bounce to $70 is instead $45 and falling. Only equities remain, and at these valuations they signify nothing but the folly of the artificial economy. The more this goes on, the more it looks like 1937 lives again.

Sourced From Jeffrey Snider via Alhambra Investment Partners,
Posted by Unknown at 8:58 AM