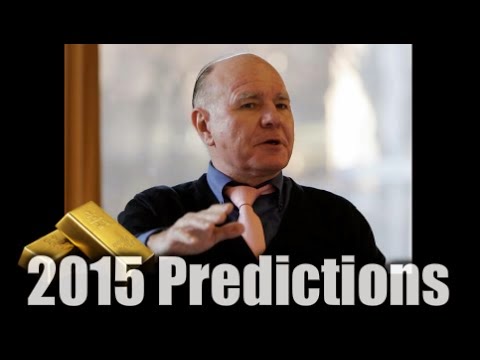 Gold on Tuesday took a breather after a strong start to the year with futures contracts in New York Mercantile retreating slightly to change hands for $1,232 an ounce, down just over $2 from Tuesday's close.
Gold is still trading at its highest since October 22 after jumping more than 4% so far this year. Gold hit a near four-year low of $1,143 early November.
Marc Faber, economist, investment guru and Wall Street stalwart, came out on Tuesday as the year's biggest gold bull, saying all asset classes except precious metals are overpriced and predicting a sharp move higher for the metal:
“I’m positive [that] gold will go up substantially [in 2015] — say 30%,” Faber, whose investment letter is called the Gloom Boom Doom Report, said at Société Générale’s global strategy presentation in London on Tuesday.
“My belief is that the big surprise this year is that investor confidence in central banks collapses. And when that happens — I can’t short central banks, although I’d really like to, and the only way to short them is to go long gold, silver and platinum,” he said. “That’s the only way. That’s something I will do.”
Gold has tanked 35% since reaching an all-time high just above $1,900 an ounce in September 2011, making it one of the worst performing assets in recent years. In 2014, it lost 1.5%, following a 28% slide in 2013. So far in 2015, however, investors have taken a liking of the metal, with the front-month contract up 4.1%, outpacing gains for even a solidly performing dollar. (U.S. equities have been testing the waters on both sides of the break-even mark.)
“We simply have highly inflated asset markets. Real estate is high, stocks are high, bonds are high, art prices are high, and interest rates and short-term deposits are basically zero,” Faber said. “The only sector that I think is very inexpensive is precious metals, and in particularly precious-metals stocks.”
Faber, at times identified as “Dr. Doom,” singled out U.S. stocks as especially overvalued. Emerging markets, in contrast, could be on the cusp of another bull run, although investing in them in the early part of 2015 may be premature, he said.
“I don’t think they are that cheap. Valuations are not expensive, but they are not the bargain of the century. But I believe some time in the next six to nine months emerging economies will become relatively attractive.”
Posted by Unknown at 8:41 AM