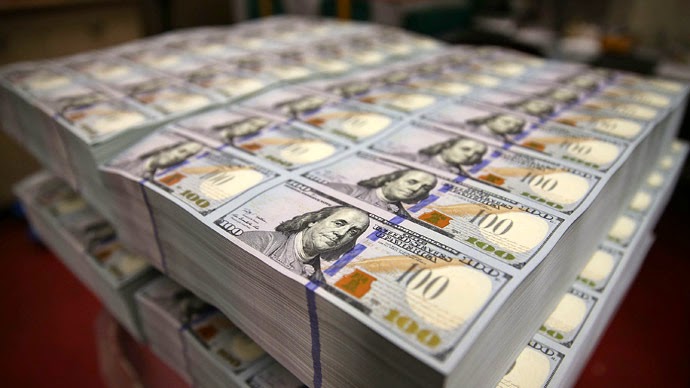 Just 13 short months ago - two months before then President Yanukovich was ousted - Russia lent Ukraine $3 billion (by buying their Eurobonds). As Reuters reports, the terms of that loan included a condition that Ukraine's total state debt should not exceed 60% of its GDP. As of last month, based on Moody's estimates, Ukraine has violated that condition with a debt-to-GDP of 72% (and will likely rise to 85% of GDP in 2015).. and so, according to Russian finance minister Anton Siluanov, "Russia has the right to demand early return of this loan." With European aid 'contingent on major reforms' and possibly taking up to 1 year, this leaves the good old IMF (i.e. the US and European taxpayer) to bridge Ukraine's 'gap' and ironically bailout Russia.

As Reuters reports, Russia can demand early repayment of the $3 billion loan at any time...

Ukraine has violated the terms of a $3 billion Russian loan but Moscow has not yet decided whether to demand early repayment, Russian Finance Minister Anton Siluanov was quoted on Saturday as saying.

Russia lent the money in December 2013 by buying Ukrainian Eurobonds, two months before Ukraine's then-president, the pro-Moscow Viktor Yanukovich, fled the country amid mass protests against his rule.

The terms of the loan deal included a condition that Ukraine's total state debt should not exceed 60 percent of its annual gross domestic product (GDP).

Last month, rating agency Moody's estimated that Ukraine's debt amounted to 72 percent of GDP in 2014 and would rise to 83 percent in 2015. It also said "the risk of default is rising".

"Ukraine has definitely violated the terms of the loan, and in particular (the condition) not to increase its state debt above 60 percent of GDP," Russia's Siluanov said, according to Interfax news agency.

"So Russia definitely has the right to demand early return of this loan. At the same time, at present this decision has not yet been taken."

But, as Bloomberg notes, the European Union "support" could take a while and it is entirely contingent upon tough reforms for Ukraine...

The European Union is considering a further 1.8 billion euros ($2.1 billion) in aid to Ukraine to help the former Soviet republic overhaul its economy, which has been ravaged by a separatist conflict in its easternmost regions.

The European Commission, the EU executive, said the fresh loans, on top of $17 billion already pledged in the International Monetary Fund-led rescue of the troubled country, werecontingent on the Ukrainian government pushing through economic reform measures and fighting corruption.

The EU has provided “unprecedented financial support and today’s proposal proves that we are ready to continue providing that support,” Commission President Jean-Claude Juncker said today in a statement. “Solidarity goes hand in hand with commitment to reform, which is urgently needed in Ukraine.”

Disbursement of the aid, which must still be approved by the European Parliament and the EU’s 28 governments, will depend on Ukraine’s adherence to the conditions of the IMF program, which include fiscal consolidation, changes in the energy and banking industries, and other measures, the commission said.

This would be the EU’s third package of loans to Ukraine, following two totaling 1.6 billion euros approved last year. A final portion of 250 million euros from the earlier aid is due to be given within the first months of this year, according to the commission.

*  *  *
So - while Russia 'suffers' under the thumb of plunging oil prices and a tumbling currency crisis, a simple decision to push Ukraine into early repayment could leave Europe - having paid out their entire Ukraine bailout to Russia - asking for moar help from the IMF (i.e. The US Taxpayer) to keep the 'crucial' nation state of Ukraine from default.
Posted by Unknown at 12:46 AM