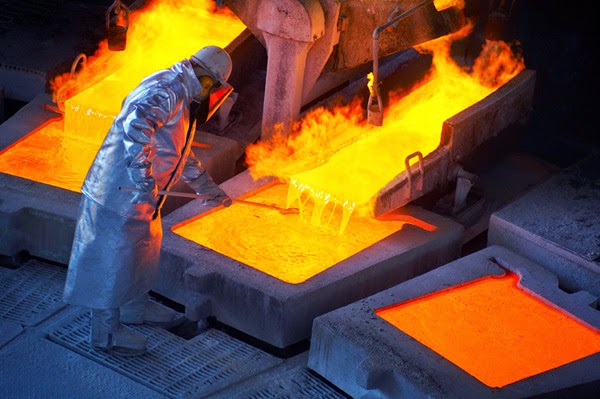 In early New York trade on Friday copper for delivery in March fell to an intra-day low of $2.738 per pound, touching levels last seen end-September 2009, after inflation data out of China renewed fears of a worsening economic outlook for the world's top consumer of the metal.

China consumes almost half the world's annual copper output and a worse than expected 3.3% drop in factory gate prices in December was interpreted as further evidence of inactivity in the country's real economy. While consumer prices showed a small uptick, producer prices in China have now fallen for 34 months in a row.
Given its widespread use in transportation, manufacturing and construction the copper price is sensitive to any economic slowdown.  China's GDP growth is expected to slow to 7% in 2015, which would be the slowest pace since 1990.

The bad PPI numbers were blamed on excess manufacturing capacity, particularly in China's heavy industries, a major factor in the 18% slide in the price of copper over the past year and the nearly 50% drop in iron ore.

The copper price has also come under pressure this week after Chinese authorities approved an export tax rebate of 9% for copper bars, rods and profiles, while increasing the rebate for foils to 17% from 13% to stimulate exports.
In a research note, Edward Meir, analyst at INTL FC Stone, says it points to uncertainty about domestic Chinese demand:
"Reuters cites Antaike as saying that the new rebate could push up exports of these products to a rather significant 100,000 tons a year. More importantly, it tells us that the government wants local industry to turn to exports if domestic offtake is not enough to sop up local metal."
The supply side picture isn't helping either. Forecast mine output growth through the year of 6% or 1 million tonnes and another 800kt in 2016 is a lot to absorb for the market and is the reason why most forecasts for the price in 2015 is below today's levels.
Falling oil, the top input costs for all miners bar those lucky enough to sit on copper oxide, could also have the perverse effect of keeping high-cost mines in the game for longer, further depressing prices.
That said, unlike iron ore where predicted oversupply this year is estimated as high as 175 million tonnes in a 1.3 billion tonne market, the copper industry is much more prone to disruptions.
Aside from the more typical disruptions associated with adverse weather, technical problems, power shortages or labour activity, copper miners are also dealing with generally higher costs due to falling grades requiring higher tonnage and rising impurity levels. The depressed price will also force companies to make tough decisions on any expansion or greenfield projects.
Image supplied by Glencore show Anibal Contreras clearing slag at the company's Altonorte metallurgical facility, northern Chile.
Posted by Unknown at 9:31 AM