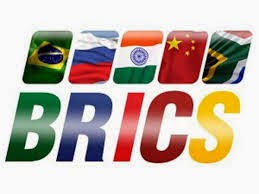 Three months ago we discussed in detail the growing anti-dollar hegemony alliances that were building across the BRICS countries (Brazil, Russia, India, China and South Africa). Their efforts at the time, to create a structure that would serve as an alternative to the IMF and the World Bank (which are dominated by the U.S. and the EU), appear to be nearing completion. As AP reports, Brazil's President Dilma Rousseff and Russia's Vladimir Putin have discussed the creation of a development bank to promote growth across the BRICS and hope to produce an agreement on the proposed institution at this week's BRICS Summit.
As AP reports,

Rousseff received Putin in the presidential palace in Brasilia on Monday, a day before leaders of the five emerging BRICS nations meet in the northeastern city of Fortaleza.

Rousseff told reporters the bank would top the summit's agenda, adding she hoped the event would produce an agreement on the proposed institution.

She said the five countries "are among the largest in the world and cannot content themselves in the middle of the 21st century with any kind of dependency."

The leaders who will be present (not so many big fans of the US there)...

They seem serious:
As we concluded previously, as RBTH reports, it seems the BRICS are not slowing down efforts to create their own IMF-alternative... 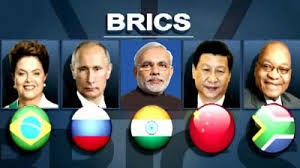 The BRICS countries (Brazil, Russia, India, China and South Africa) have made significant progress in setting up structures that would serve as an alternative to the International Monetary Fund and the World Bank, which are dominated by the U.S. and the EU. A currency reserve pool, as a replacement for the IMF, and a BRICS development bank, as a replacement for the World Bank, will begin operating as soon as in 2015, Russian Ambassador at Large Vadim Lukov has said.

Brazil has already drafted a charter for the BRICS Development Bank, while Russia is drawing up intergovernmental agreements on setting the bank up, he added.

In addition, the BRICS countries have already agreed on the amount of authorized capital for the new institutions: $100 billion each. "Talks are under way on the distribution of the initial capital of $50 billion between the partners and on the location for the headquarters of the bank. Each of the BRICS countries has expressed a considerable interest in having the headquarters on its territory," Lukov said.

It is expected that contributions to the currency reserve pool will be as follows: China, $41 billion; Brazil, India, and Russia, $18 billion each; and South Africa, $5 billion. The amount of the contributions reflects the size of the countries' economies.

The creation of the BRICS Development Bank has a political significance too, since it allows its member states to promote their interests abroad. "It is a political move that can highlight the strengthening positions of countries whose opinion is frequently ignored by their developed American and European colleagues. The stronger this union and its positions on the world arena are, the easier it will be for its members to protect their own interests," points out Natalya Samoilova, head of research at the investment company Golden Hills-Kapital AM.

Perhaps the following sums it all up perfectly...

Economists warn the IMF's legitimacy is at stake, and they say U.S. standing abroad is being eroded.

If the current trend continues, soon the dollar will be abandoned by most of the significant global economies and it will be kicked out of the global trade finance. Washington's bullying will make even former American allies choose the anti-dollar alliance instead of the existing dollar-based monetary system. The point of no return for the dollar may be much closer than it is generally thought. In fact, the greenback may have already past its point of no return on its way to irrelevance.