Nickel Prices may top $30,000 a metric ton by Citigroup 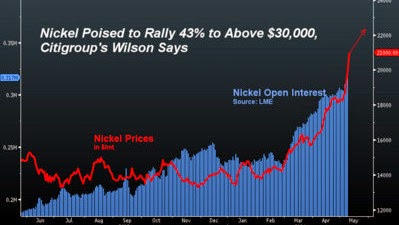 Nickel, this year’s best-performing metal, is set to rally an additional 43 percent by the end of next year as supply concerns prompt investors to pile in, according to Citigroup Inc.
The CHART OF THE DAY shows nickel’s open interest, or the number of contracts yet to be closed, liquidated or delivered, has surged for five straight months to a record 316,793. Prices rallied 51 percent this year after Indonesia, the largest producer of the metal from mines, banned exports of unprocessed ore in January.
The jump in open interest is “reflecting the extreme nature of change that the nickel market is facing with the Indonesian export ban,” David Wilson, an analyst at Citigroup in London, said in a telephone interview. “It’s the only real story that anybody is interested in, from an investor perspective.”
Prices may top $30,000 a metric ton in 2015, according to Citigroup, which last year correctly predicted that Indonesia would implement the export ban. The last time the commodity traded above that level was in April 2008. Nickel settled at $21,000 a ton yesterday on the London Metal Exchange.
Increasing open interest at a time when prices are rising, can indicate that traders are adding to long positions, or bets on price gains. When prices are declining, the increase in open interest may mean traders are adding to wagers on price declines.
Posted by Unknown at 1:30 PM