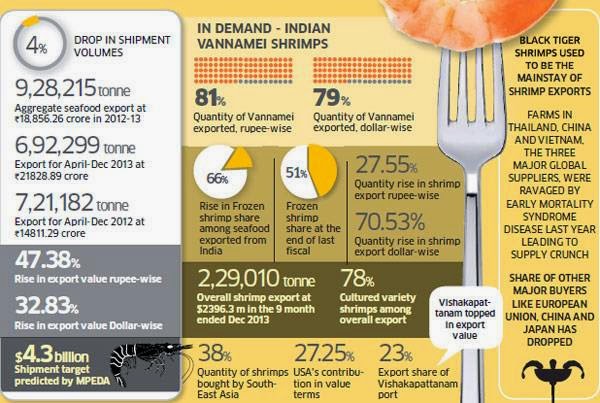 Exports of marine products touched a record $5.007 billion during 2013-14.
At a news conferenceLeena Nair, chairperson of the Marine Products Export Development Authority (MPEDA), said the total export earnings were $5.007 billion (₹30,213 crore.) In rupee terms, the growth was a whopping 60 per cent over the previous year, though in dollar terms this was 42.60 per cent. In the previous year, the earnings were $3,512 million.
In quantity terms, 9,83,756 tonnes were exported, an increase of around 6 per cent. Fish items were the largest chunk in terms of quantity, though when it came to value, frozen shrimp was the biggest money earner. More than three lakh tonnes of shrimp were exported, of which 73 per cent was cultured. There was also a 35 per cent increase in unit value – black tiger shrimp secured the highest value.
Among regions, South-East Asia continued to be the largest buyer of Indian marine products with a share of 26.38 per cent, followed by the US with a share of 25.68 per cent. The European Union is the third largest buyer with 20.24 per cent share, followed by Japan at 8.21 per cent, other countries 8.20 per cent, China 5.85 per cent and West Asia 5.45 per cent.
One reason for the higher exports is increased production of L. Vannamei shrimp, whose exports to the US market jumped to 59.63 per cent. Export of frozen shrimp rose by 7.38 per cent in quantity terms and 28.23 per cent in dollar terms.
Nair said lower exports from Thailand and other prawn-producing countries because of a disease that had afflicted their aquaculture. On the other hand, depreciation of the rupee against the dollar and increased production of vannamei in Andhra Pradesh and other States helped in higher earnings from prawns. The quality of Indian prawns and other marine products had improved remarkably – contributing significantl to the rise in unit price. Participation in major global seafood fairs also had helped.
Posted by Unknown at 10:26 AM