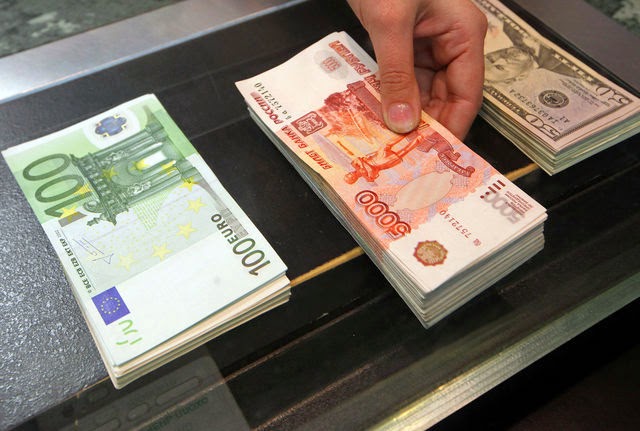 That Russia has been pushing for trade arrangements that minimize the participation (and influence) of the US dollar ever since the onset of the Ukraine crisis (and before) is no secret: this has been covered extensively on these pages before (see Gazprom Prepares "Symbolic" Bond Issue In Chinese Yuan;Petrodollar Alert: Putin Prepares To Announce "Holy Grail" Gas Deal With China; Russia And China About To Sign "Holy Grail" Gas Deal; 40 Central Banks Are Betting This Will Be The Next Reserve Currency; From the Petrodollar to the Gas-o-yuan and so on).
But until now much of this was in the realm of hearsay and general wishful thinking. After all, surely it is "ridiculous" that a country can seriously contemplate to exist outside the ideological and religious confines of the Petrodollar... because if one can do it, all can do it, and next thing you know the US has hyperinflation, social collapse, civil war and all those other features prominently featured in other socialist banana republics like Venezuela which alas do not have a global reserve currency to kick around.
Or so the Keynesian economists, aka tenured priests of said Petrodollar religion, would demand that the world believe.
However, as much as it may trouble the statists to read, Russia is actively pushing on with plans to put the US dollar in the rearview mirror and replace it with a dollar-free system. Or, as it is called in Russia, a "de-dollarized" world.
Voice of Russia reports citing Russian press sources that the country's Ministry of Finance is ready to greenlight a plan to radically increase the role of the Russian ruble in export operations while reducing the share of dollar-denominated transactions. Governmental sources believe that the Russian banking sector is "ready to handle the increased number of ruble-denominated transactions".
According to the Prime news agency, on April 24th the government organized a special meeting dedicated to finding a solution for getting rid of the US dollar in Russian export operations. Top level experts from the energy sector, banks and governmental agencies were summoned and a number of measures were proposed as a response for American sanctions against Russia.
Well, if the west wanted Russia's response to ever escalating sanctions against the country, it is about to get it.

The "de-dollarization meeting” was chaired by First Deputy Prime Minister of the Russian Federation Igor Shuvalov, proving that Moscow is very serious in its intention to stop using the dollar. A subsequent meeting was chaired by Deputy Finance Minister Alexey Moiseev who later told the Rossia 24 channel that "the amount of ruble-denominated contracts will be increased”, adding that none of the polled experts and bank representatives found any problems with the government's plan to increase the share of ruble payments.
Further, if you thought that only Obama can reign supreme by executive order alone, you were wrong - the Russians can do it just as effectively. Enter the "currency switch executive order":

It is interesting that in his interview, Moiseev mentioned a legal mechanism that can be described as "currency switch executive order”, telling that the government has the legal power to force Russian companies to trade a percentage of certain goods in rubles. Referring to the case when this level may be set to 100%, the Russian official said that "it's an extreme option and it is hard for me to tell right now how the government will use these powers".

Well, as long as the options exists.
But more importantly, none of what Russia is contemplating would have any practical chance of implementation if it weren't for other nations who would engage in USD-free bilateral trade relations. Such countries, however, do exist and it should come as a surprise to nobody that the two which have already stepped up are none other than China and Iran.

Of course, the success of Moscow's campaign to switch its trading to rubles or other regional currencies will depend on the willingness of its trading partners to get rid of the dollar. Sources cited by Politonline.ru mentioned two countries who would be willing to support Russia: Iran and China. Given that Vladimir Putin will visit Beijing on May 20, it can be speculated that the gas and oil contracts that are going to be signed between Russia and China will be denominated in rubles and yuan, not dollars.

In other words, in one week's time look for not only the announcement of the Russia-China "holy grail" gas agreement described previously here, but its financial terms, which now appears virtually certain will be settled exclusively in RUB and CNY. Not USD.
And as we have explained repeatedly in the past, the further the west antagonizes Russia, and the more economic sanctions it lobs at it, the more Russia will be forced away from a USD-denominated trading system and into one which faces China and India. Which is why next week's announcement, as groundbreaking as it most certainly will be, is just the beginning.