How U.S.A Spend Their Time Online

We have good news for budding entrepreneurs considering launching yet another online method of stalking the object of their affection: exhibitionism and sharing photos of your dinner, pardon social networking, remains as popular as ever on the internet.
According to an online survey by GfK and the Interactive Advertising Bureau, people said they spent about an average of 37 minutes a day on social networks like Facebook and Twitter in 2013. That internet staple, emailing, clocked in at a 29 minutes, while watching online video was 23 minutes. 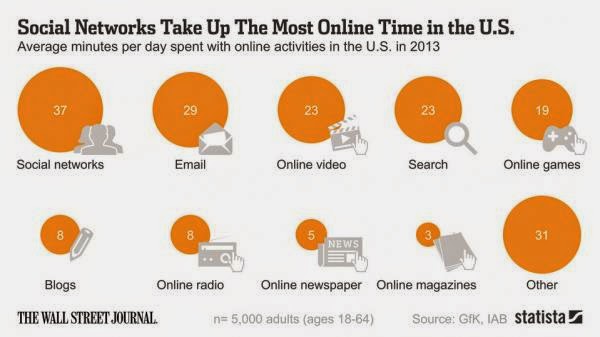 However, in a troubling trend for the YouTubes of the world, the WSJ notes that while people doubled the amount of time they spent watching online video over the past four years, the overall percentage of their online time spent watching video slipped to 12% in 2013 from 13% the year before.
But the worst news is for that biggest loser of all in the New Online Normal: legacy media, whose paper publications are an endangered anachronism in a day and age when everyone reads (if only the headlines) on their mobile device, is also getting hammered when it comes to its online incarnation, with the average American spending just 5 minutes reading online newspapers, less than even blogs.
Of course, when the day comes that the final investigative reporter and journalist loses their job, suddenly the question will arise what will all those 20-some year old "journalism" majors whose only skill is to copy and paste, do?
For now nobody cares to even contemplate this issue: they are too busy updating their Facebook profiles.
Posted by Unknown at 7:52 AM

Email ThisBlogThis!Share to TwitterShare to FacebookShare to Pinterest
Labels: Interesting