Due to increasing world population, which might be more than 9 billion by 2050 and improved diets, the demand for the zinc as micro-nutrient in the agriculture is increasing greatly. The main zinc chemicals which have the highest demand are zinc chloride, zinc sulfate, and zinc oxide, based on the reports of global market research by IHS.
Director of specialty chemicals at IHS Chemicals, Stefan Schlag said that zinc is an essential element for both animal and plants. Zinc deficiency has become a serious threat to the public health, especially in children. Thus many nations are implementing measures to increase the zinc fertilizer usage in zinc deficient regions, he added.
Now the total demand for zinc is about 1.5 million tons. Stefan said that this would exceed 1.8 million tons by the end of 2018 and about 400 thousand metric tons of the demand would be of agricultural demand, mainly in the form of zinc sulfate. In 2012 and 2013 China included Zinc fertilizers for major crop production.
This increased the production of Zinc fertilizers and use in China increased from 50,000 metric tons to 100,000 tons metric ton per year, based on IHS Chemical estimates. One of the most common micronutrient deficiency problems worldwide is zinc deficiency. The deficiency is especially found in grain crops. Reports of IHS says that nearly 50 percent of cultivate soil all around the world contains less amount of zinc and it would become 65 percent by 2018. It would decrease the production of edible plants.
Studies conducted in Brazil, India and China proved that zinc can increase the yield of crop from 8 percent to 20 percent yearly. With the declining amount of arable land per person and increasing population, global crop yield should be increased to meet up the food necessities. Due to these reasons IHS forecast a demand growth for Zinc, is so bullish on the agricultural sector. 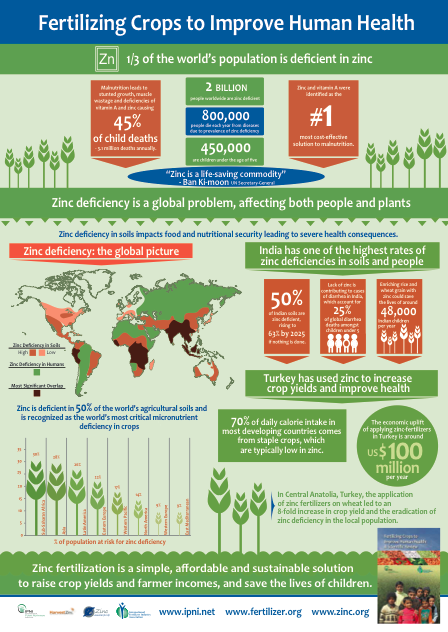 Email ThisBlogThis!Share to TwitterShare to FacebookShare to Pinterest
Labels: Base Metal Zinc, Interesting