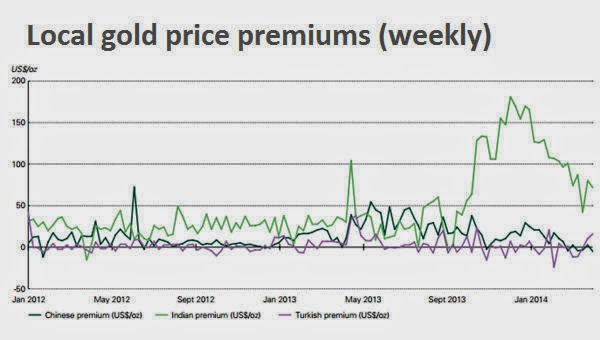 Mainland China's demand for gold fell 18% in the first quarter of the year as investors bought fewer bars and coins, offsetting record demand for jewellery, according to the latest trend report from the World Gold Council.
The London-based industry body said Chinese purchases declined to 263.2 tonnes, despite a 10% jump in jewellery consumption to a new record level.
The decline in demand for bars and coins – down 55% to 60 tonnes – more than offset interest in jewellery which was boosted by Chinese New Year and Valentine's day buying.
Lower demand from China, which surpassed India as the world's largest gold consumer last year, was blamed on price-sensitivity as gold appreciated nearly 8% in 2014.
The WGC said the most notable decline in jewellery consumption at the country level was in India, with a 9% drop in jewellery demand to 145.6 tonnes.
India's bars and coins buying also showed a huge drop-off of 54% to 98 tonnes. Overall gold demand on the subcontinent slid 26%.
WGC says "as demand for physical gold investment products fell back, the pressures that had been squeezing the supply chain throughout 2013 eased," pushing down price premiums in a number of local markets.
Premiums demanded in China topped out at $37 an ounce last year when gold was trading around $1,200 but fell into discount territory this year.
Premiums in India stayed elevated, but retreated from the stratospheric levels seen late 2013 as curbs on gold imports took its toll.
Posted by Unknown at 9:50 AM