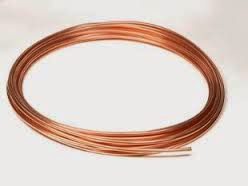 Copper in Shanghai climbed for a third day to a 11-week high as stockpiles tracked by exchanges in London, Shanghai and New York slumped. Aluminum rose to the highest in four weeks.
The contract for delivery in August on the Shanghai Futures Exchange added as much as 0.8 percent to 49,110 yuan ($7,875) a metric ton, the highest price since March 7, and was at 49,020 yuan by 9:54 a.m. local time. Futures advanced 1 percent last week, gaining for the second straight week.
Refined-copper inventories dropped to 283,645 tons last week, the lowest level since 2008, according to data from exchanges. SHFE-tracked reserves fell 4.5 percent to 92,652 tons, near the lowest since December 2011. Inventories available for removal from LME warehouses fell below 100,000 tons for the first time since 2008. Markets in the U.S. and U.K. are closed today for holidays.
“Copper was supported by strong spot premiums in Shanghai and London because of the falling inventories,” said Lian Zheng, an analyst at Xinhu Futures in Shanghai. “The momentum should continue unless China posts disappointing economic data again and concerns over China’s physical demand arise.”
Copper for immediate delivery on the LME settled at $93 a ton above the three-month contract on May 23, the widest since May 2012. Higher prices for earlier deliveries usually signal limited supplies. The metal for delivery in July on the Comex in New York rose 0.7 percent to $3.189 a pound.
In Shanghai, aluminum for delivery in August added 0.5 percent to 13,565 yuan a ton after touching 13,660 yuan, the highest since April 25. The global aluminum market will be in deficit this year by 1.3 million tons, leading producer United Co. Rusal said May 23.
Posted by Unknown at 11:01 AM