Nickel Drops Most Since Mid-2012 on Adequate Supply 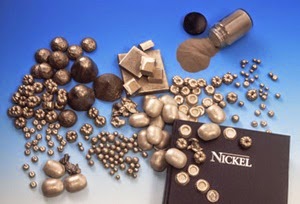 Nickel posted the biggest drop since December 2011 as some investors deemed a surge to a two-year high to be excessive amid signs of sufficient supply.
Nickel inventories tracked by the London Metal Exchange have risen 6.6 percent since December, even as a ban on unprocessed-ore exports by Indonesia, the biggest supplier of the mined metal, helped drive prices up 44 percent this year. Nickel’s 14-day relative strength index rose to 91 yesterday, the highest since 2004. Readings above 70 signal to some investors that prices may decline.
“Some of the speculators may have gotten a little too long” in betting on further price gains, Bart Melek, the head of commodity strategy at TD Securities in Toronto, said in a telephone interview. “There’s still a lot of material out there. There’s quite a bit of inventory.”
Nickel for delivery in three months dropped 4.6 percent to settle at $20,030 a metric ton at 5:51 p.m. on the London Metal Exchange, the biggest decline since Dec. 14, 2011. Prices touched $21,625 yesterday, the highest in 27 months.
Prices may pull back toward the end of May and the beginning of June before rebounding later in the year, Citigroup Inc. said May 9. Goldman Sachs Group Inc. raised its six-month price target to $22,000 from $20,000 after prices rose “more quickly than in our base case,” analysts including Jeffrey Currie wrote in a report dated yesterday.
Copper for delivery in three months advanced 1.1 percent to $6,920 a ton ($3.14 a pound) on the LME. Zinc, tin, lead and aluminum also advanced in London.
In New York, copper futures for July delivery advanced 0.8 percent to $3.16 a pound on the Comex, the highest close since March 6.
Posted by Unknown at 7:30 AM