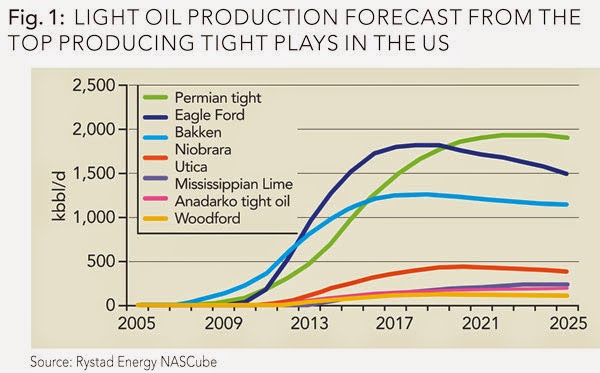 U.S. crude production climbed to a 28-year high last week as the shale boom moved the world’s biggest oil-consuming country closer to energy independence.
Output rose 78,000 barrels a day to 8.428 million, the most since October 1986, according to Energy Information Administration data. The combination of horizontal drilling and hydraulic fracturing, or fracking, has unlocked supplies from shale formations in the central U.S., including the Bakken in North Dakota and the Eagle Ford in Texas.
“This is an incredible phenomena that looks set to continue,” John Kilduff, a partner at Again Capital LLC, a New York-based hedge fund that focuses on energy, said by phone. “There’s a long way to go before we explore and exploit all of the shale deposits out there.”
The U.S. met 87 percent of its energy needs in 2013, and 90 percent in December, the most since March 1985, according to the EIA, the statistical arm of the Energy Department.
Crude output will average 8.46 million barrels a day this year and 9.24 million in 2015, up from 7.45 million last year, the EIA said in its monthly Short-Term Energy Outlook on May 6. Next year’s projection would be the highest annual average since 1972.
The EIA forecasts that the gain in production at shale fields will be augmented by greater offshore output this year and next. Crude output in the waters of the Gulf of Mexico will climb by 150,000 barrels a day in 2014 and by an additional 240,000 barrels in 2015, following four consecutive years of declines, according to the May 6 report.

U.S. Energy Secretary Ernest Moniz said yesterday that the mismatch between rising production of light oil in the U.S. and the country’s refining ability is driving the debate over whether to lift a ban on crude exports. The crude unlocked from shale deposits is too low in density to be absorbed entirely by the U.S. refining system, Moniz told reporters in Seoul.
“The driver, or the consideration, is that the nature of oil we are producing may not be well matched to our current refinery capacity,” Moniz said.
The remarks highlighted pressure to overturn 1975 legislation that bars exports while U.S. production rises and inventories swell. Senator Lisa Murkowski of Alaska, the senior Republican on the Energy and Natural Resources Committee, said in a Jan. 7 speech that she supports changing the export rules.
“This increases the pressure on the U.S. to finally allow for the export of crude,” Kilduff said. “The U.S. could be a major player in global export market.”

Production gains helped send U.S. inventories to 399.4 million barrels in the week ended April 25, the most since the EIA began reporting weekly data in 1982. Stockpiles increased 947,000 barrels to 398.5 million barrels in the week ended May 9, according to the agency.
Inventories along the Gulf Coast, known as PADD 3, grew 2.33 million barrels last week to 215.7 million, the most in EIA data going back to 1990. Supplies there have been growing since January as the southern leg of the Keystone XL pipeline began moving oil to Gulf Coast refineries from Cushing, Oklahoma, the largest U.S. storage hub.
Futures rose after today’s EIA report showed supplies at Cushing, the delivery point for WTI, dropped for the 14th time in 15 weeks. Inventories fell 592,000 barrels last week to 23.4 million, the lowest level since Dec. 5, 2008.
West Texas Intermediate crude for June delivery increased 67 cents, or 0.7 percent, to settle at $102.37 a barrel today on the New York Mercantile Exchange. It was the highest closing price since April 21.
Posted by Unknown at 8:20 AM