Another day of copper price plunge.

In afternoon New York trade on Thursday May copper changed hands at $2.936 a pound, erasing all of yesterday's strong gains.
Earlier in the day the red metal fell as low as $2.913, down more than 2%, after Federal Reserve Chair Janet Yellen made upbeat comments about the strength of the US economy.
On Wednesday copper price futures went on wild ride falling to multi-year low of $2.877 by midday only to attract strong buying towards the end of the day to close within sight of the psychologically important $3.00 a pound level.
While the hawkish comments by Yellen indicate expectations of stronger growth in the US thanks to housing starts at a six-year high and continuing strength in manufacturing, growth in the US cannot offset the slowdown in China.
Copper is down more than 13% this year, with most of the losses coming in March after a steady stream of dismal economic numbers out of China – responsible for 47% of total global copper demand – sent prices tumbling.
Given its widespread use in transportation, manufacturing and construction the weakness in China is having a significantly negative impact on underlying copper demand.
At just over 10 million tonnes a year, China consumes more than four times the amount of copper than the US does and three times that of Europe.
Chinese growth is expected to come in below the official target of 7.5% this year, the slowest pace since 1990 as the country's new leaders transform the economy from an investment-led to a consumption driven one.
Chinese authorities are also doing everything they can to throttle back debt-fueled growth – earlier in March, Choari Solar became the first Chinese company in history to default on a corporate bond, sending shivers through Chinese industry and sparking fears of a knock-on effect.
The slowdown in China is also coming at a time of significant production expansion in copper.
Codelco's new 160,000 tonnes-plus Ministro Hales mine in Chile, Glencore's Las Bambas project in Peru it is close to selling to China's Minmetals, expansion at other Codelco properties and at BHP Billiton's Escondida will help global output top 22.2 million tonnes from just over 21 million tonnes in 2013. 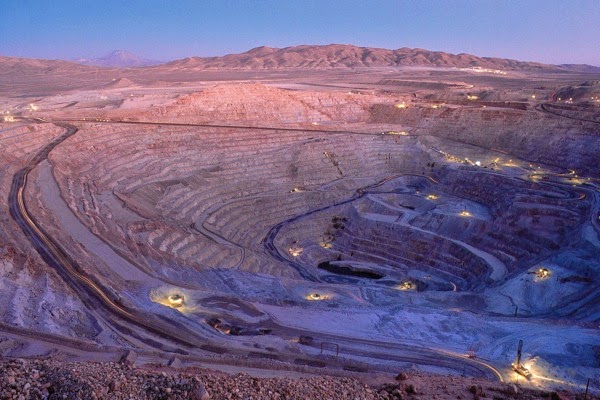 Already gargantuan Escondida mine is being bulked up
Posted by Unknown at 11:17 AM