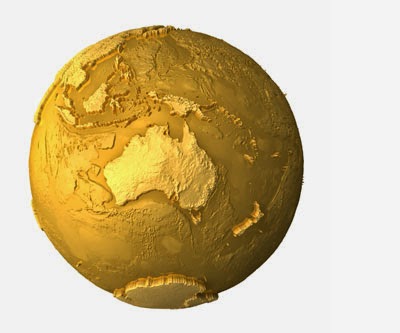 Australia's gold output hit a 10-year high last-year as lower gold prices forced miners to produce higher-grade deposits, according to mining consultant Surbiton Associates Pty which produces one of the largest reviews of the Australian gold industry.
According to Bloomberg, production rose by 18 metric tonnes to 273 tonnes in 2013 – "the highest annual output since 2003."
“Producers are responding to lower gold prices by treating less low grade material and this results in higher output and reduced costs,” a director at Surbiton said, as reported by Bloomberg. “The downside in processing higher-grade ore is that some lower grade material that was economic to treat at higher prices, is no longer profitable.”
The gold price dropped 28% in 2013.
Australia's gold output has surged since  2008 when it was the world's fourth biggest producer of the precious metal. Today the country ranks second, though its 2013 output doesn't come close to China's 430 tonnes.
Posted by Unknown at 7:37 AM