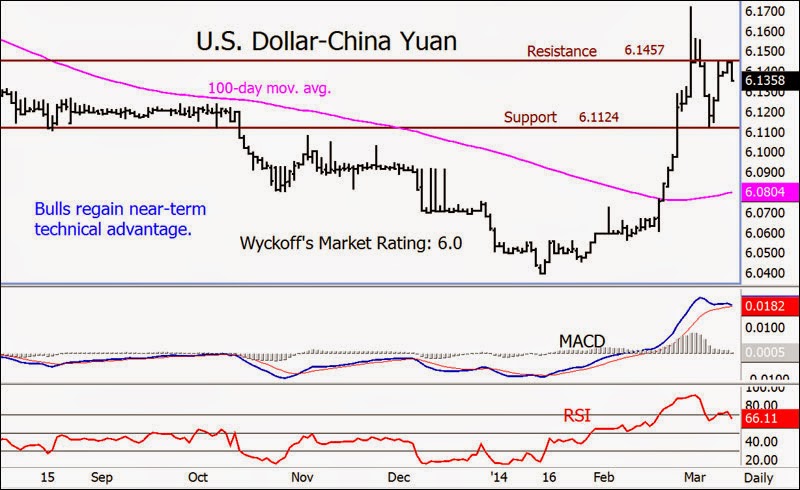 Continued weakness and rising volatility in the Chinese yuan is being felt in the copper markets, a trend that some analysts are expecting to continue as investors adjust to higher risks and more open Chinese markets.
On March 3, USD/CNY opened at 6.1648, its highest open since July, 2013. Prices have since come down but still remain well above the mid-January lows around 6.040. As of 11:58 a.m. EDT USD/CNY was trading at 6.1371.
Marc Chandler, head of global currency strategy at Brown Brothers Harriman said the yuan’s current price represents a drop of about 1.5%, which is not a very volatile move compared to other currencies; however, he added the drop has been sudden enough to squeeze investors.
Chandler added that a popular investment vehicle was to borrow low-yielding U.S. dollars and purchase Chinese yuans and higher yielding bond investments, sometimes referred to as the “Chinese carry trade.” As long as the Chinese currency continued to make gains, investors made money, he said.
“What is important is that the (People’s Bank of China) has changed its tactics and is re-introducing some volatility in the (yuan),” he said. “There are a lot of structured products that were leveraged bets that the currency would stay strong. Even though 1% is a very small move - if you are leveraged 20 to 1, it kills you.”
Chandler said the reason the yuan is having an impact on copper prices is because the two are linked together. He pointed out investors used copper, iron ore or gold as collateral against these carry trade investment products.
“The unwind of the (Chinese) carry trade is not just about U.S. dollar/(yuan), it is also about (yuan)/commodities too,” he said.
Robbert van Batenburg, director of market strategy at Newedge agreed with Chandler and said “The unwinding of this copper-financed borrowing activity can both explain the excessive weakness in copper prices and the recent weakness in the yuan.”
Posted by Unknown at 9:52 AM