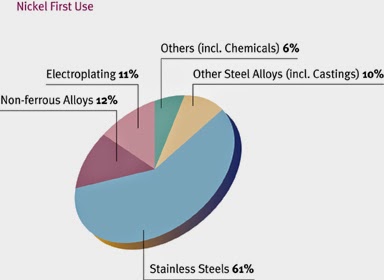 Nickel rose to the highest level in 11 months as raw ore stockpiles in China, which produces a quarter of global production, are falling amid an Indonesian export ban and on speculation Russian supply will be disrupted.
The metal for delivery in three months climbed as much as 0.7 percent to $16,310 a metric ton, the highest intraday level since April 10, and traded at $16,231 at 10:20 a.m. in Hong Kong. Nickel has risen 17 percent this year.
Nickel entered a bull market yesterday on speculation Russian supplies will be disrupted at a time when some shipments are already banned in Indonesia. The U.S. and the European Union slapped sanctions on Russia after a disputed vote in Crimea paved the way for President Vladimir Putin to annex the region from Ukraine. Chinese nickel pig iron producers began stockpiling raw ore from Indonesia in the run-up to the ban, which started on Jan. 12.
“People are going after the available supply and there’s a sense that if something doesn’t happen very soon, you really would have a situation where you would run out of the stockpiles in a few months,” Sijin Cheng, a commodities analyst at Barclays Plc, said by phone from Singapore.
China’s inventory at factory warehouses and ports is enough to sustain output at last year’s pace until July, according to a Bloomberg survey in January. Small and medium sized plants are expected to run out of material stocks over March and April, according to the survey. China’s imports of ore from Indonesia rose by 21 percent in January from a month earlier, according to customs.
Posted by Unknown at 10:24 AM