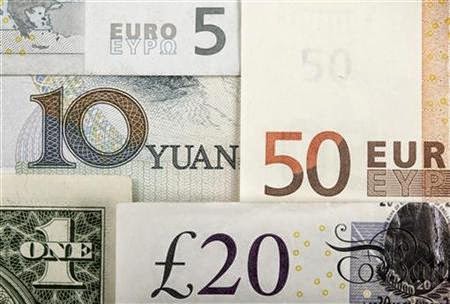 Beijing and Berlin agreed to launch an offshore yuan trading centre on Friday as President Xi Jinping visited Germany on the third leg of his European tour.
The central banks from both countries - the Bundesbank and the People's Bank of China - signed a Memorandum of Understanding in Berlin to allow the clearing and settlement of yuan trades in Frankfurt.
The centre, in Germany's financial capital, will be the first of its kind in the eurozone.
It forms part of a series of deals the two countries signed on Friday, which sources say could be worth billions of euros. China will also set up a consulate in Duesseldorf.
The trading centre will be a "great facilitator for both China-Germany trade and China-EU trade", said Meng Hong, an expert on Germany at Renmin University of China.
Maggie Zhao, a senior associate at the law firm Clifford Chance in London, said the agreement demonstrates a commitment by both governments to work together on yuan internationalization.
"It shows that the Chinese government is keen to support the yuan's internationalization, and that the German government is keen to support its financial services industry to get more involved in the yuan internationalization process," Zhao said.
In his meeting with German Chancellor Angela Merkel, Xi said deepening bilateral relations between the two countries will be beneficial to Europe and the world.
He said the next five to 10 years will be a key period for mutual growth.
The two countries will also set up a new dialogue mechanism on diplomacy and security, he said.
Merkel thanked China for its support and trust in the euro during the eurozone crisis and vowed to strengthen yuan cooperation with Beijing.
It is the first State visit to Germany by a Chinese president for eight years. During the two-day visit, leaders of both countries will map out the direction for bilateral relations in the next five to 10 years.
After arriving in Berlin on Friday morning, Xi said cooperation between China and Germany has been fruitful since the countries established diplomatic relations more than 40 years ago.
Both nations now share broader common interests and new cooperation opportunities, he said.
Germany is China's biggest trade and technology partner in the European Union. Bilateral trade volume reached $161.6 billion in 2013, 580 times that of 1972 when the two countries established diplomatic relations.
Claudia Schmucker, head of the Globalization and World Economy Program at the German Council on Foreign Relations, said Germany and China are very much reform-oriented.
"Therefore, I believe that the Germany-China economic and trade relationship will continue to increase and deepen in the upcoming years," Schmucker said. "Germany has always played a pivotal role in the EU-China relationship and this will continue."
German Ambassador to China Michael Clauss said, "We have growing German investment into China and we also wish to have more Chinese investment into Germany. "
He said Chinese investment in German companies is very welcome, including medium-sized and small companies. "Germany has profited from this a lot in past decades, so it really is a win-win situation," the ambassador said.
On Saturday, Xi will visit North Rhine-Westphalia to await the arrival of a train loaded with IT products on a 16-day journey from Chongqing.