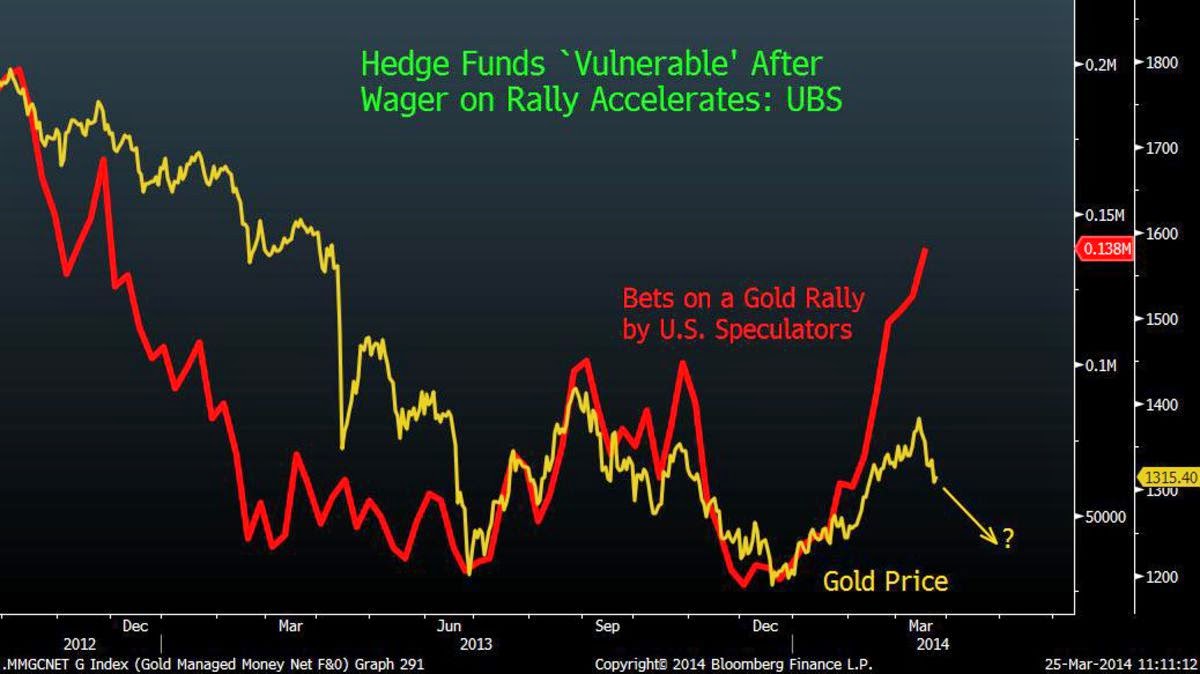 After boosting bets on higher gold prices,hedge funds may hesitate from buying more of the metal on expectations for higher U.S. interest rates and unless the standoff between Russia and the West intensifies, UBS AG said.
The CHART OF THE DAY shows that speculators and other money managers increased their net-long positions, or wagers on a rally, to the highest level since November 2012 in the week ended March 18. The buying of gold futures and options helped prices reach a six-month high on March 17. It fell as much as 6.3 percent since then.
Gold rebounded from the biggest annual drop in three decades as Russia’s move to annex Crimea spurred demand for a haven. Federal Reserve Chair Janet Yellen said on March 19 that that the central bank’s benchmark rate may rise about six months after monetary stimulus ends later this year. Prices rose 70 percent from December 2008 to June 2011 as the Fed pumped more than $2 trillion into the financial system and cut interest rates to boost the economy.
“In the wake of the more hawkish Fed last week, the continuous expansion in spec positioning and with geopolitical headlines dampened, longs are likely feeling quite vulnerable here,” Edel Tully, a UBS analyst in London, wrote in a report yesterday. “The pace of increase itself has been quite dramatic. Simply put, this nature of positioning is unsustainable. We don’t think gold has yet found its price floor.”
Gold has climbed 8.8 percent to $1,311.63 an ounce in London since the end of December, after dropping 28 percent last year, and reached $1,392.22 on March 17. Speculators are holding a net-long position of 138,429 contracts, U.S. Commodity Futures Trading Commission data show. Prices were above $1,700 when the wager was last that high.
Top industrial powers threatened stiffer sanctions to deter Russian President Vladimir Putin from seizing more of Ukraine. U.S. and European Union have focused mainly on imposing asset freezes and visa bans on individuals. Putin said he doesn’t plan to further split up Ukraine after Crimea voted to join Russia.
Posted by Unknown at 10:41 AM