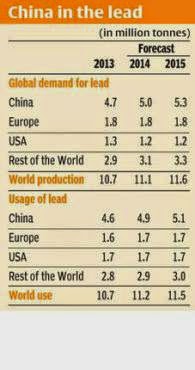 Lead is one base metal with a distinctly bullish outlook going by market fundamentals. A deficit is forecast for 2014 and 2015, pushing the stocks-to-consumption ratio to its lowest level since 2010.
The projected tightness is underpinned by the US demand. The 400,000-tonne market deficit in 2013 is likely to expand to 500,000 tonnes in 2014 and continue into the following year, resulting from the closure of a primary smelter with 110,000-tonnes-a-year capacity.
Fortunately, growth in primary smelter production, outside China, is set to expand by about 100,000 tonnes, neutralising the impact of the US closure. Yet, with a projected 3-4 per cent increase in total ex-China demand, tightness appears inevitable. Then there is the question of non-reported stocks.
How large are they? According to International Lead and Zinc Study Group data, there is a 50,000-tonne off-warrant build-up in the US since 2012, which is a small buffer to the tightness projected in the region in the context of depleted LME stocks.
Supply drops

From a supply perspective, there is likely to be restraint in the growth of mine output following anticipated shutdowns of key mines around the world over 2014-15 despite potential spare capacity in China.
Lead output may be expected to grow at 3-4 per cent per annum this year and the next.
On the demand side, in countries such as China where new car sales have expanded at more than 10 per cent in recent years, demand for lead will be driven by both the continuing expansion in automobile sales as well as the steadily increasing demand for replacement batteries. It is this dynamic that supports a bullish forecast for lead demand among the BRIC (Brazil, Russia, India and China) countries, anticipating growth in demand of 6 per cent for these countries. Importantly, Chinese demand for lead benefits from rapid expansion in the use of e-bikes in China and neighbouring countries. The e-bike batteries typically have a shorter life prior to renewal, raising the volume of replacement demand. Additional demand growth is expected to arise from power storage for the rapidly expanding network of 3G and 4G telecom masts.
As for India, demand for lead acid batteries is seen rising by 10-12 per cent a year as the country embraces solar power and e-bikes. However, domestic supplies are unlikely to expand as rapidly. So, demand may be rationed.
The US demand for lead acid batteries has grown steadily over the past three years at about 2 per cent a year. Within this overall demand, original equipment demand has expanded rapidly in line with the growth in new vehicle sales while growth in demand for replacement equipment (which makes up about 90 per cent of total battery demand) has grown more slowly. Demand could rise faster with fundamental changes to both recycling and new battery technology.
Price outlook

Despite deficit in the global lead market, prices have failed to make marked gains. In part, this can be attributed to the general weakness in the base metals complex. China could possibly raise its domestic output more rapidly, which can temper the bullish outlook. As for price outlook, in H1 this year, lead could average $2,200/t, rising to $2,300/t in H2.
Posted by Unknown at 7:26 AM