Russia Is Slowly Turning The NatGas Tap Off To Europe

While Naftogaz (Ukraine's gas pipeline operator) states that all gas transportation from Russia to Europe is running normally, Bloomberg reports that Russian natgas exports to Europe are declining. Shipments are down over 4% from the prior week and also lower to Ukraine. This 'adjustment' follows increased sanctions by the West as Medvedev's notable statement this morning that Ukraine owes Russia $16bn.
NatGas output is tumbling
The good news:

Medvedev adds $3b Ukraine bonds bought in Dec., ~$2b debt to Gazprom for natgas supplies

NOTE: In 2010, Russia agreed to sell natgas at discount in exchange for extending lease to Black Sea naval port of Sevastopol in Crimea to 2042 from 2017

Russian natgas exports to Europe and Turkey, excl. former Soviet Union, declined to 405.3mcm as of March 22,  according to Bloomberg calculations based on preliminary data from Energy Ministry’s CDU-TEK unit.

Avg daily exports to region were ~457mcm in March, lower than yr earlier: calculations based on CDU-TEK data

Russia is now asking close to $500 for 1,000 cubic meters of gas, the standard unit for gas trade in Europe, which is a price about a third higher than what Russia’s gas company, Gazprom, charges clients elsewhere.

Russia says the increase is justified because it seized control of the Crimean Peninsula, where its Black Sea naval fleet is stationed, ending the need to pay rent for the Sevastopol base. The base rent had been paid in the form of a $100 per 1,000 cubic meter discount on natural gas for Ukraine’s national energy company, Naftogaz.

And if that's not clear enough... 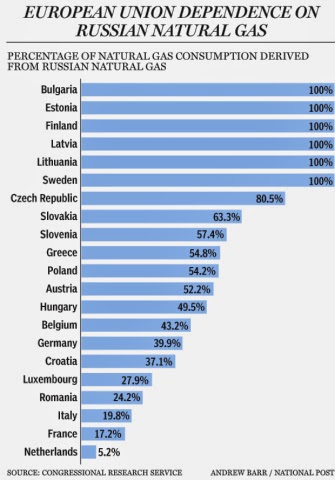