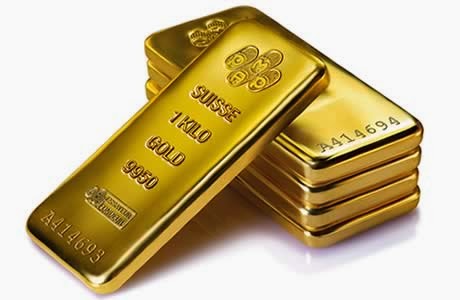 The gold price ended higher Friday after bullish positions held by large investors soared again.
By the close of regular trade on the Comex division of the New York Mercantile Exchange, gold futures for June delivery – the most active contract – rose to $1,335 an ounce but remained sharply off for the week.
On Monday the metal hit a high above $1,380, the best level since June and up 14.8% since the start of the year.
Long positions – bets that the price will go up – held by so-called managed money increased to 151,939 lots in the week to February 18 according to Commodity Futures Trading Commission data released after the close of business on Friday.
At the same time short positions, indicating weaker prices ahead, were cut by 7,563 to just under 13,510, which translates on a net basis hedge funds holding 138,429 lots or 13.8 million ounces, the highest in more than a year.
The 12.5% jump was the sixth week in a row that large investors increased bullish positions and more significantly it showed fresh buying, compared to the increases of previous weeks which were to cover short positions.
In December 2013 longs fell to a paltry 26,774 lots while shorts held by large investors peaked at more than 80,000 lots, the highest since 2007, back when gold changed hands for $700 an ounce.
It's not only gold derivatives that are finding favour from the smart money in 2014.
Holdings of SPDR Gold Shares – the world’s largest gold ETF holding more than 40% of the total – on Friday shot up 4.2 tonnes, bringing year to date gains to 18.75 tonnes.Investors in gold-backed ETFs are also returning to the market in droves after 2013 saw net redemptions of a staggering 800 tonnes.
While the additions have been fairly modest it is in sharp contrast to last year when GLD recorded only 17 days of inflows over the course of the 12 months and almost 540 tonnes left the fund.
In the week to 14 March global gold ETF holdings rose 12.3 tonnes the biggest move since November 2012, taking total holdings to 1766.4 tonnes, the highest level since December 27 and more than 30 tonnes above the lows for the year.
Gold bullion holdings in global ETFs hit a record 2,632 tonnes or 93 million ounces in December 2012.
But I personally feel it will touch $ 1285 or $ 1261 before any Big upside move. In Weekly Charts Bearish Engulfing Pattern is formed which means correction may be to Fibonacci 38 or 50 % .