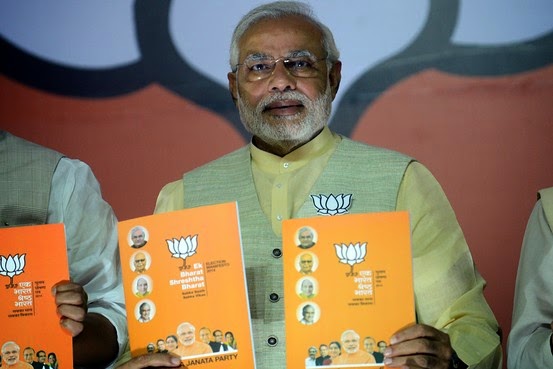 India's Bharatiya Janata Party accused its main political rival, Congress, of driving away investors during its decade in power and promised more business-friendly policies if it is elected in national polls that started Monday.
In its election manifesto, released Monday morning in New Delhi, the BJP said: "We will bring back credibility and trust in government, resowing confidence in the India story domestically as well as internationally."
The Hindu nationalist party also attacked the incumbent Congress party-led government for using "tax terrorism" against companies. The BJP said it would provide a nonadversarial administration and simplify the country's complicated tax laws.
The BJP, and its candidate to be prime minister, Narendra Modi, appear to be in the lead as voters began casting their ballots in an election that is to last five weeks. A recent poll by the Pew Research Center found that more than 60% of Indians favor a BJP-led government.
A string of corruption allegations, rising inflation, slow policy-making and huge tax notices to several foreign companies have hurt investor confidence in India, dragging down economic growth to its weakest in several years.
Indian stocks have rallied on investors' belief that the BJP is likely to win and run a government more attuned to business interests.
Election results are to be announced on May 16.
http://www.bjp.org/manifesto2014
Posted by Unknown at 11:41 AM