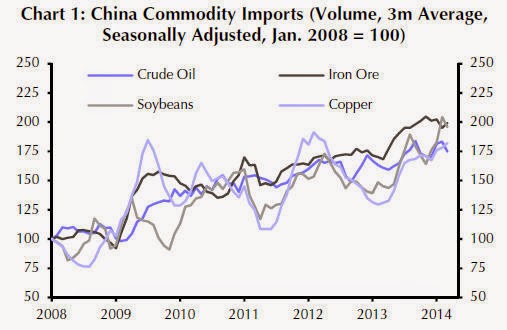 Markets were shocked on Thursday by surprisingly weak trade data from China, the world's second largest economy, that showed overall imports falling by double digits and exports declining 6.6%.
But China's appetite for raw materials like iron ore and copper appear undiminished.
Chinese steel mills and iron ore traders made the most of soft prices for the commodity in March, ramping up imports 21%.
After a steep drop off, mostly attributed to seasonal factors, in February of more than 25 million tonnes from the record setting pace in January, imports jumped to just under 74 million tonnes in March.
First quarter imports are 19% higher than last year and at 222 million tonnes imply an annualized tally of almost 890 million tonnes, compared to 2013's 820 million tonnes.
The surge in imports also come despite iron ore stockpiles at China's ports reaching fresh highs of 108 million tonnes this week.
Long a practice in the copper market, some estimates put the portion of the country's iron ore stockpiles used as collatoral for trade credit at 40%.A factor boosting imports is tightening domestic credit conditions in China which encourage imports as part of financing deals.
The benchmark price of iron ore was down slightly on Thursday, but is up 14% from 18-month lows suffered early March.
According to data from the The Steel Index, the import price of 62% iron ore fines at China's Tianjin port lost $0.30 to $119.10 per tonne on Thursday, down from $134.20 at the start of the year.
Copper shipments also defied weakness in China, rising a whopping 31.4% on year to 420,000 tonnes. That's up from 379,000 tonnes in February due to the Lunar New Year holiday, but down from a particularly strong 536,000 tonnes in January this year.
China's copper imports are very price sensitive and the red metal fell to a near four-year low in March of $2.92 a pound.
The copper price has since recovered to above $3.00 a pound, but is down more than 10% year to date and a new study suggests more pain is in the offing.
The closely-watched Thomson Reuters GFMS Copper Survey forecasts a period of copper market surpluses as global mine supply ramps up and predicts the average price to test $2.75 a pound ($6,000/tonne) in the second half.
Posted by Unknown at 11:13 AM