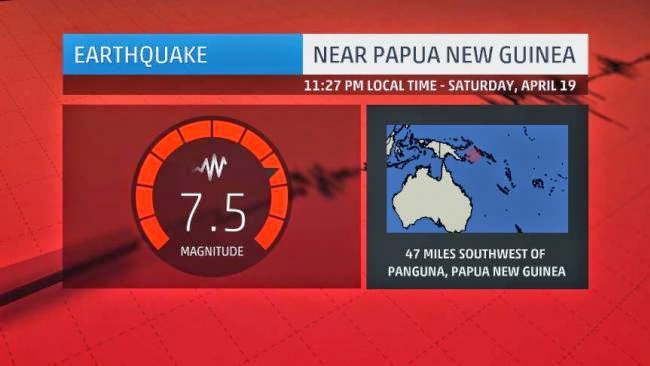 An earthquake struck late Saturday off Papua New Guinea's eastern coast with a preliminary magnitude of 7.5, the U.S. Geological Survey said.
The quake struck at 11:27 p.m. (9:27 a.m. ET) and occurred at a depth of 19 miles (32 km), the USGS said.
It was centered 47 miles (75 km) southwest of Panguna, Papua New Guinea.
After the quake, the Pacific Tsunami Warning Center issued a tsunami warning for Papua New Guinea and the Solomon Islands, but then canceled it. Saturday's incident is the latest in a series of seismic events in the region over the week. They began with magnitude-7.1 and magnitude-6.5 earthquakes on April 11, just to the northeast and southeast, respectively.
Since then, 45 earthquakes of magnitude-4.5 or greater have occurred nearby. Earthquakes with magnitudes between 7.0 and 7.9 are classified by USGS as "major," second only to "great," which are 8.0 and up.
Posted by Unknown at 10:51 AM