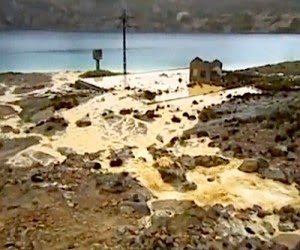 Chinalco Mining Corporation, a subsidiary of China-own Chinalco, said Monday it had to partially halt its activities at the Toromocho copper project in Peru, as the country’s environmental watchdog ordered it Friday to do so (in Spanish) because of environmental concerns.
After inspections carried out from March 16 to March 20, the agency concluded that Chinalco has been dumping waste in the Huacrococha and Huascacocha lakes.
The environmental regulator posted a video showing a yellow-coloured liquid flowing into the mentioned waterways, which presented a higher than allowed level of contaminants at the time of the assessments.
Toromocho, in central Peru, is set to become one of the largest copper and molybdenum plants in the world. It began initial production in December last year and is scheduled to reach full production in the third quarter of 2014.
Peru is the world's second biggest copper producer. Chinalco has been developing the US$3.4 billion Toromocho since 2008.
Posted by Unknown at 6:45 AM