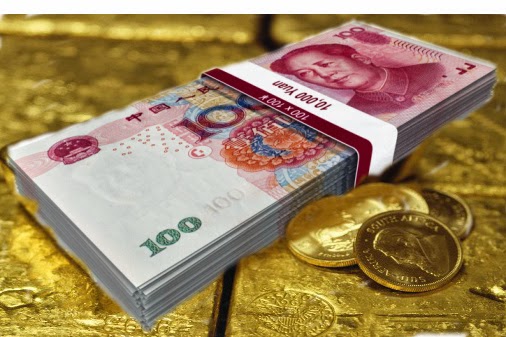 The price of gold ended the holiday-shortened week below the psychologically and technically important $1,300 level, losing almost 2% since Monday.
The sell-off was blamed on an easing of tensions between Russia and the West over Ukraine after marathon diplomatic talks on Thursday.
The gold price was also hurt by renewed profit-taking ahead of the Good Friday long weekend when many markets in the West are closed for trading.
Investors continued to pull money out of the SPDR Gold Trust (NYSEARCA:GLD), the world's largest physically-backed gold ETF accounting for some 40% of total holdings in the industry.
A new report suggests there may be other reasons for the recent weakness in the yellow metal: The slide in the value of the Chinese currency, the yuan, to levels against the US dollar last seen in February.
Copper being used in China as collateral for loans and to bypass the country's capital control regulations has long been a staple of the industry.
With the tight credit conditions inside the country, the practice has spread to iron ore and gold. Some estimates put the the portion of copper stockpiles used in finance deals as high as 80%, while 40% of iron ore inventories could be tied up for trade credit.
This week a report by the World Gold Council said Chinese firms could have locked up as much as 1,000 tonnes of gold in financing deals.
DailyFX explains the dynamic of how this could push down the gold price:

"The highest USD/CNY fixing rates in months may have forced the unwinding of some extremely overleveraged positions. Although the systems of financing are often complex as we saw with copper, gold has been used for some even more complex and lucrative structures surrounding the skirting of capital controls.
"In regards to the depreciating Yuan, political pressure continues to build with Treasury officials warning the Chinese not to weaken the Yuan for their economic benefit. Meanwhile, the daily reference rates out of the PBoC continue to move higher toward the ominous 6.25 mark. That is said to be the level where a large concentration of leveraged financial vehicles may experience some serious stresses."
Another indication that there may be lots of gold on offer in China is the disappearance of premiums paid on the Shanghai Gold Exchange.
From premiums that topped out at $37 when gold was trading around $1,200 last year, traders are now offering gold at a discount or a couple of dollars above to the quoted London spot price.
Driven in part by a weakening yuan discounts on gold in China widened to as much as $9 an ounce below when the price were headed towards $1,400 in March.
Posted by Unknown at 6:44 AM