For the first time, Russia has confirmed that it has built up its military presence on the Ukrainian border (according to Agence France Presse). On the heels of the de-escalation and the West's threat of tougher sanctions (if Russia failed to abide by the new 'deal'), Kremlin spokesman Dmirty Peskov told Rossiya TV that "we have troops in different regions, and there are troops close to the Ukrainian border. Some are based there, others have been sent as reinforcements due to the situation in Ukraine." Reuters also reports that Washington statements "are unlikely to help dialogue," and further sanctions would be "absolutely unacceptable." It seems the 'deal' has done little to calm anything but the US equity market as Peskov blasted "You can't treat Russia like a guilty schoolboy." 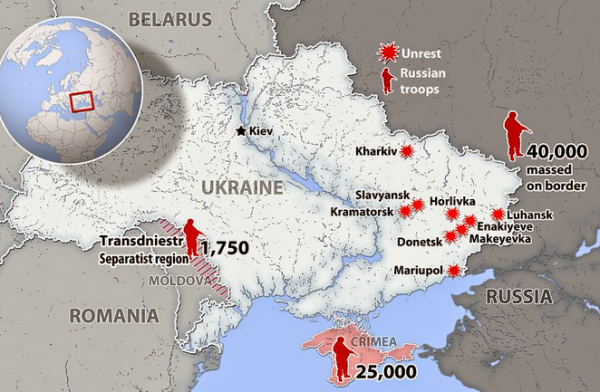 Reuters adds that President Vladimir Putin's spokesman, Dmitry Peskov, said, "Statements like those made at a high level in Washington that the United States will follow in detail how Russia fulfils its obligations ... are unlikely to help dialogue,"

"You can't treat Russia like a guilty schoolboy who has to put a cross on a piece of paper to show he has done his homework," Peskov said in an interview with Russia's First Channel. "That kind of language is unacceptable."

Russia's Foreign Ministry accused U.S. officials of seeking to whitewash what it said was the use of force by the Ukrainian government against protesters in the country's mainly Russian-speaking eastern provinces.

"The blame for the Ukrainian crisis and its current aggravation is unreasonably being placed on Russia," the ministry said in a statement.
"The American side is once again stubbornly trying to whitewash the current actions of Kiev's authorities, who have embarked on a course for the violent suppression of protesters in the southeast who are expressing their legitimate indignation over the infringements of their rights."